Fifty years ago this month, Robert F. “Bobby” Kennedy was shot at the Ambassador Hotel in Los Angeles moments after stepping off the stage where he claimed victory in the California presidential primary election. Kennedy died the next day. The gunman was 22-year-old Palestinian Sirhan Sirhan who later confessed to the crime. 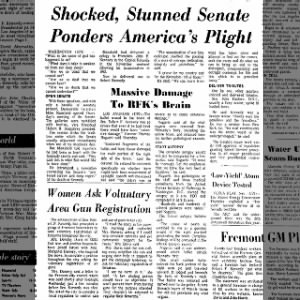 The news stunned the world. Senators paid tribute to Kennedy, and religious leaders exclaimed, “Something’s wrong with us!” When word of the shooting made its way to Vietnam, one American soldier responded saying, “What the hell is going on back there?”

Kennedy campaigned aggressively in California, crisscrossing the state. He won with a narrow victory. The mood was celebratory the night of June 5, 1968 at the Ambassador Hotel. Kennedy addressed the crowd shortly after midnight and exited the ballroom through a kitchen. Sirhan rushed towards him in a narrow corridor and shot him at close range.

The gun was wrestled away as Sirhan continued firing resulting in five others being wounded including William Weisel, Paul Schrade, Elizabeth Evans, Ira Goldstein, and Irwin Stroll. The cheers and applause heard seconds before quickly turned to screams and panic when the shots rang out.

Kennedy was rushed to Good Samaritan Hospital where doctors performed surgery but were unable to save him. At the time of Kennedy’s assassination, presidential candidates did not have Secret Service security. His death stirred Congress to pass a law providing that protection for future candidates.

Kennedy’s death came just five years after that of his brother, President John F. Kennedy. Robert Kennedy’s body was flown to New York, where he lay in repose at Saint Patrick’s Cathedral before burial. The nation mourned with Kennedy’s widow Ethel and his 10 young children. An eleventh child was born after Kennedy’s death.

In 2016, Sirhan was denied parole for the 15th time and remains in prison today. What do you remember about the day Robert F. Kennedy was shot? You can search our archives to find more articles on his life and death. You can also follow us on Facebook, Instagram, and Twitter for trending news and updates!