Hoosier Momma? If you’re looking to fill in blanks in your family tree from the Hoosier state, or have an interest in history from Northwest Indiana, then you’ll be delighted to know we’ve added the Northwest Indiana Times to our growing archives. Issues on Newspapers.com date back to 1906. 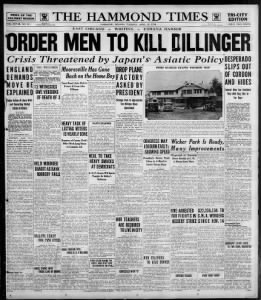 The Times started out as The Hammond Daily Tribune in 1883. George Hammond, the town’s namesake, was a butcher who patented refrigerated rail cars. He was looking to expand beyond Chicago for the stockyard industry. Available land, the abundance of ice on Lake Michigan, and refrigerated rail cars provided the perfect place to purchase land and open a large slaughterhouse. Many of the area’s early settlers were immigrants from Germany. Hammond hired them for their skills as butchers and sausage-makers. However, because they couldn’t read English, newspaper circulation was stagnant.

That changed in 1906 when Sidmon McHie, a wealthy Chicago grain and stock broker, purchased the struggling Hammond Daily Tribune with the intent to market the paper beyond the city of Hammond. He changed the name to The Lake County Times. Circulation increased dramatically. McHie and his wife Isabel lived a colorful life that mirrored his headlines. Social issues of the day such as the Jazz Age, flappers and divorce were covered by the paper.

The McHies became front page news themselves when Isabel was caught throwing $10,000 from a moving train. She attempted to throw away another $173,000 before police stopped her. The McHies’ eventually divorced.

The Lake County Times regularly published society pages that included news from surrounding towns like St. John, Lowell, Merrillville and others. These pages are a valuable research tool and give a glimpse into everyday life for Lake County’s early citizens. This issue dated April 8, 1922 is an example.

After the death of McHie, his nephew James S. DeLaurier took over. He sought to widen the audience and dropped Hammond from the paper’s name. In 1962, the McHie family sold the paper to Robert S. Howard. Offices were moved to Munster in 1989 and the masthead was simplified to read The Times. In 2002 Lee Enterprises purchased The Times. It is one of the largest newspapers in the state.

You can access issues of The Times through 1922 with a basic subscription; issues between 1923-2018 are copyrighted and accessible with Publisher Extra! Search our archives for The Times here.