If you have ancestors from Kansas or an interest in Kansas history, we’re pleased to announce a partnership with the Kansas Historical Society that will ultimately make available nearly 11 million pages of newspapers, primarily from pre-1923. We’re halfway through digitizing this collection and adding more records every day! The entire archive will be digitized by year’s end! 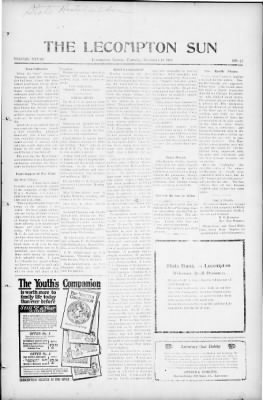 Kansas became the 34th state in 1861, months before the start of the Civil War. In a clipping from The Lecompton Sun, an early Kansas pioneer remembered the conflict over slavery that led to bloody battles in Kansas in an era known as the Border War or Bleeding Kansas. Lecompton’s Constitution Hall is where the territorial government drafted a pro-slavery constitution which would be used for obtaining Kansas statehood. This constitution was ultimately rejected at a national level and never went into effect.

After the Civil War, railroads expanded to Kansas. Military posts were installed to protect the railroad. This led to the creation of small towns dotting the rail line and plenty of newcomers. This clipping from The Dodge City Daily Globe in 1912 heralded the new railroad that would double the town’s population — unless, of course, you wanted to “Get Outta Dodge!”

Newspapers from early Kansas communities provide a glimpse into the daily life of settlers. This page from the Weekly Republican in Cherryvale is a typical example. Like many other Kansas towns, the population of Cherryvale tripled from 1880-1890 because of westward expansion. Early newspapers recorded births, deaths, and other details of settlers lives.

Expansion led to increased confrontation with Native American tribes as their land was given to whites. This clipping from the El Dorado Republican recounts the incredible story of a woman kidnapped by the Sioux tribe in 1877. She later concluded that Native Americans had been treated unjustly by settlers. Tribes were forced to smaller reservations and tensions were high.

In 1874, Russian immigrants arrived in Goessel, and according to legend, came with kitchen crocks full of Turkey Red winter wheat seed. The wheat berries contained more protein and proved well-suited for the climate. Until then, corn was the Kansas crop of choice. Today Kansas is one of the world’s top wheat producing regions.

In 1886, developer Ben Blanchard was drilling for oil when he hit salt instead. The town of Hutchinson sprang up and the Kansas salt industry was born.

The famous landmarks of Castle Rock and Monument Rocks in Gove County have been landmarks for many including explorer John C. Freemont and travelers on the Overland Trail. Monument Rocks was the first designated National Natural Landmark in Kansas. The monuments have also been a gathering spot for many Kansans over the years.

Search our archives to learn more about Kansas history or to document your early Kansas ancestors through this historical newspaper collection!