On May 4, 1886, a bomb was detonated during a peaceful labor demonstration in Chicago’s Haymarket Square. The bomb and ensuing violence left seven policemen and a number of civilians dead and many others wounded. 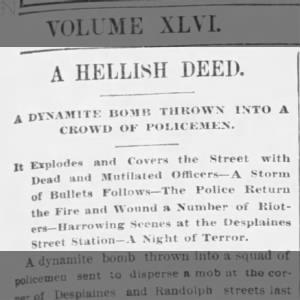 The day before the incident at Haymarket Square, two striking workers had been killed at the McCormick Harvesting Machine Company during an altercation with police. The following day, thousands of people gathered in Haymarket Square to protest the police violence and to listen to a number of labor leaders speak in support of better working conditions.

The gathering was peaceful and, due to poor weather, eventually dwindled to about three hundred people. When 180 policemen were dispatched to disperse the crowd, someone threw a bomb at the police. The police (as well as some in the crowd) responded by opening fire, and when things finally calmed down, one policeman and at least four civilians had been killed (six other policemen would later die of their injuries); numerous other policemen and bystanders were wounded.

Although the person who threw the bomb was never identified, eight labor activists were arrested and put on trial. Seven received death sentences, and the other was given 15 years in prison. Of the seven who were sentenced to death, four of them were hanged in 1887, one committed suicide, and two had their sentences commuted to life in prison. In 1893, the surviving three were pardoned by the governor based on the unfairness of the original trial.

Public opinion immediately following the Haymarket Riot generally landed on the side of the police. Because the eight defendants (and others involved with the labor movement) were immigrants and socialists or anarchists, the public increasingly saw the labor movement as a hotbed of foreign-born radicals. Anti-anarchist hysteria grew, spurred by the exaggerated accounts of many newspapers. However, for those within the labor movement, the Haymarket Riot came to represent the struggle for workers’ rights, and the event inspired many future labor activists.

Do you have any family stories about the Haymarket Riot or the labor movement? Share them with us! Or learn more about the event by searching Newspapers.com.

25th Anniversary of the Death of Diana, Princess of Wales