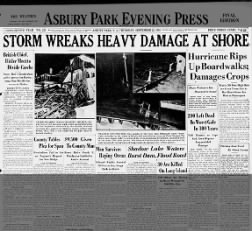 On the afternoon of September 21, 1938, a massive hurricane unexpectedly slammed ashore in New England in what would be one of the deadliest and costliest natural disasters in United States history.

The hurricane was first detected in the Caribbean on September 16, and soon the storm was forecasted to hit southeast Florida on the morning of the 20th. Floridians began preparing for the hurricane, but it unexpectedly turned north before it could make landfall in Florida. The storm was expected curve back out to sea, but instead it traveled due north virtually unnoticed. Unaware that the hurricane was headed straight for New England, no hurricane warnings were given outside of Florida, meaning New Englanders were caught totally by surprise, especially since they hadn’t experienced a major hurricane in over 100 years.

The hurricane was not only unusual for hitting New England, it was also unique for the speed at which it traveled, racing from North Carolina to Long Island in just 7 hours—which inspired its nickname, the “Long Island Express.” By 10 a.m. on the morning of the 21st, the sky had clouded over at Long Island, and it began to get windy. By afternoon, the wind was gusting hard and the sky had turned yellow. Even so, since there had been no hurricane warning, residents assumed it would be just a bad late-summer storm. 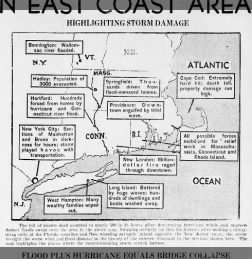 The hurricane made landfall on Long Island around 3 p.m., slamming ashore with such force that it was picked up by seismographs in Alaska. In addition to the hurricane-force winds and driving rain, a massive storm surge flooded the coast. On the mainland, the storm caused immense damage to the coasts of Massachusetts, Connecticut, and Rhode Island in particular, though all states in the area were affected to varying degrees. The hurricane entered Canada early on the morning of the 22nd, where it finally began to peter out, though it still caused gale-force winds in Montreal.

Ultimately, more than 680 people were killed (more than half of them in Rhode Island), and 1,750 people were seriously injured. 20,000 buildings were totally destroyed and another 75,000 were damaged. The hurricane even permanently altered the coastline in some places. Aid was quickly sent to the area, and rescue and rebuilding efforts began immediately, but the damage to many local industries was severe.

Do you have any family who lived through the Great New England Hurricane? Tell us about them! Or search for more articles about the storm on Newspapers.com.