If you’ve seen the film Amazing Grace, then you’ve heard the name William Wilberforce. The tireless abolitionist was born on this day in 1759.

In 1780 Wilberforce’s dynamic political career began. His focus—in politics and in life—changed drastically after he converted to evangelical Christianity five years later. In 1787 he was introduced to leading abolitionists of the day such as Thomas Clarkson, and a long and laborious 20 year battle against slavery in the UK began. 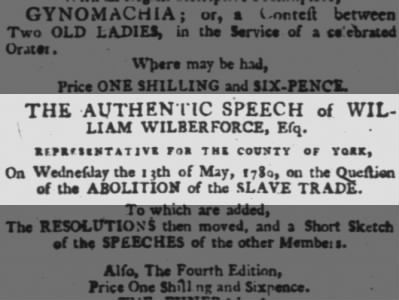 In 1907, after years of concerted effort, delays, and opposition, the Slave Trade Act passed and the slave trade was abolished in the British Empire. But Wilberforce and other abolitionists’ work was not yet finished. They continued to work for the removal of slavery itself. 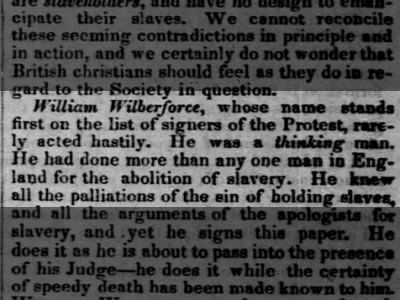 Wilberforce suffered from poor health for decades and eventually became so ill that he retired from Parliament in the mid 1820s. That’s not to say that he stopped his involvement in politics entirely. On the contrary, he continued to push toward abolition until quite literally his dying day. After a terrible bout of influenza in 1833, he heard that the bill to abolish slavery in most of the British Empire was assured to go through. He passed away three days later. 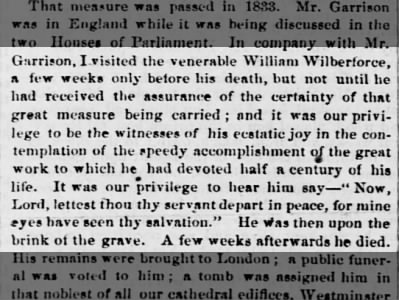 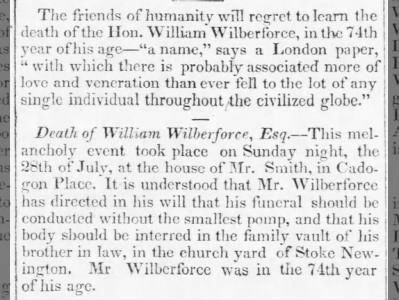 The Slavery Abolition Act of 1833 did indeed pass in late August of that year. Though Wilberforce had wished to be buried with some of his family at Stoke Newington, it was thought that he deserved the honor of a place in Westminster Abbey. He was buried near William Pitt.

For more articles like these on Wilberforce, check out Newspapers.com. You could also try a search on American abolition and the names associated with it, or look for any other topic of interest using the search page.

One thought on “William Wilberforce—A Force Against Slavery”