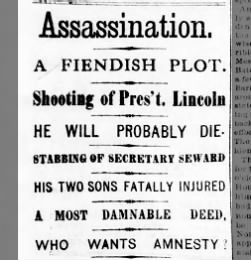 This month marks the 150th anniversary of the assassination of Abraham Lincoln. He was shot on April 14 around 10 o’clock at night while attending a play at Ford’s Theatre in Washington DC.

The assassin, actor John Wilkes Booth, entered the Lincolns’ box and shot the president in the back of the head before jumping over the railing and down onto the stage. A fanatic for the Confederate cause, Booth exclaimed “Sic semper tyrannis” (Thus always to tyrants), the Virginia state motto, before escaping the theater.

The comatose President Lincoln was taken to a bedroom of a boardinghouse across the street, where he was attended by various doctors and visited by his wife and his son, Robert, as well as by various friends and political acquaintances. Lincoln, who never regained consciousness, died nine hours after being shot, at 7:22 in the morning. 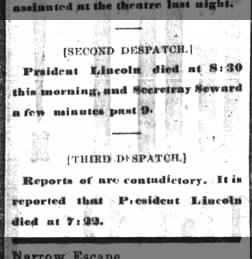 About the same time as Lincoln’s assassination, one of Booth’s co-conspirators made an attempt on Secretary of State William Seward‘s life. Though gravely wounded, Seward would survive (though some newspapers initially reported him dead). Vice President Andrew Johnson was also an intended target, but his would-be assassin lost his nerve and did not attack. The final target was allegedly Ulysses S. Grant, though no successful attempt was made on his life.

You can find a wide variety of articles about Lincoln’s assassination on Newspapers.com. For an overview of the events of the night of the 14th, try reading this account from the New York Times, written the day after, which gives a fairly in depth look at the assassination. For even more detail on Lincoln’s last moments, read this column, from the Junction City Weekly Union, which documents Lincoln’s deteriorating condition throughout his final night. If you’re more interested in the nation’s response to the assassination, this article from the Daily Milwaukee News excerpts reactions from across the country (as well as Canada).

The assassination also provoked countless editorials and opinion pieces. Two editorials that provide an interesting contrast of opinions are this one, from the Brooklyn Daily Eagle and this one from the New Berne Times; the two take different stances on whether or not the country should continue to work for the conciliatory peace that Lincoln had favored. Another interesting opinion piece is this one from the Wilmington Herald, which ponders how Lincoln’s death may affect the South’s reentry into the Union.

Interested in learning more about Lincoln’s assassination and the aftermath? Search for these topics on Newspapers.com. Or check out the Lincoln Assassination Papers over on Fold3.