Have you been as fascinated as the rest of the internet with Knickers, the giant steer in Australia? Then do we have a blog post for you! We’ve gathered photos of some of the biggest bovines we could find in the newspapers from the last 100 years. How do these cows, steers, and bulls measure up to Knickers, who stands nearly 6 feet 4 inches and weighs more than 3,000 pounds? Read on to find out! We won’t “steer” you wrong!

If we start from the shortest of the bunch (which is still amazingly tall), first is Big Jim, who was once owned by Will Rogers. In this photo from 1936, the steer was 5 feet 5 inches tall and weighed 3,100 pounds. 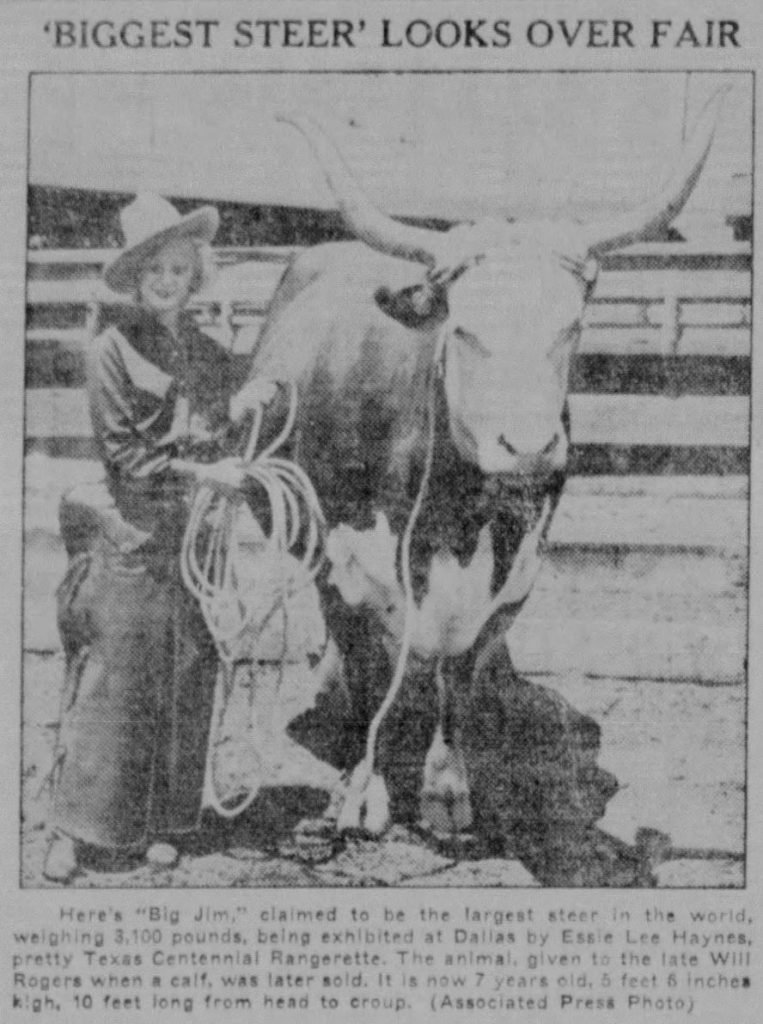 Next is this giant Holstein bull from Kentucky in 1960. The newspaper didn’t report how tall he was, but he weighed in at a whopping 3,126 pounds and was the largest at the Kentucky State Fair! 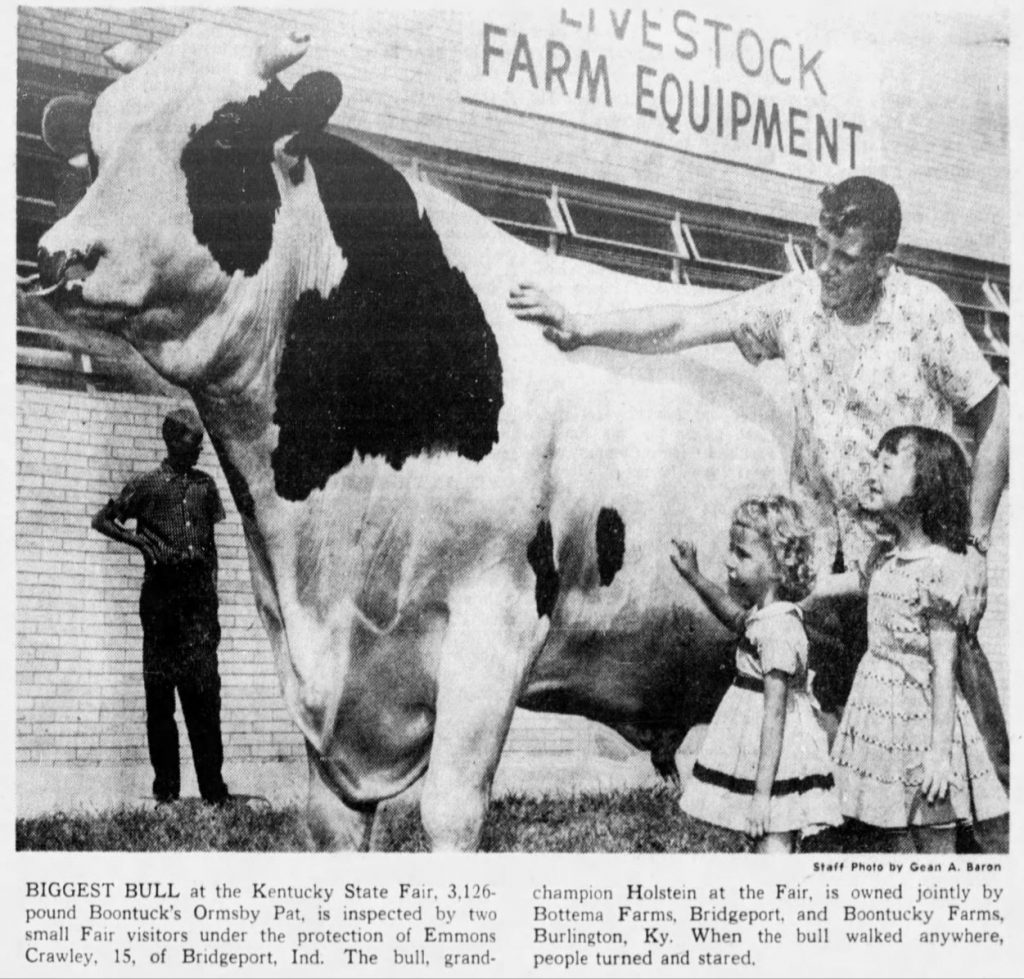 From 1925, we have a Shorthorn-Hereford from Nebraska. The newspaper was unclear about whether it was a steer or a bull, but either way it stood 5 feet 7 inches high and weighed 3,200 pounds. 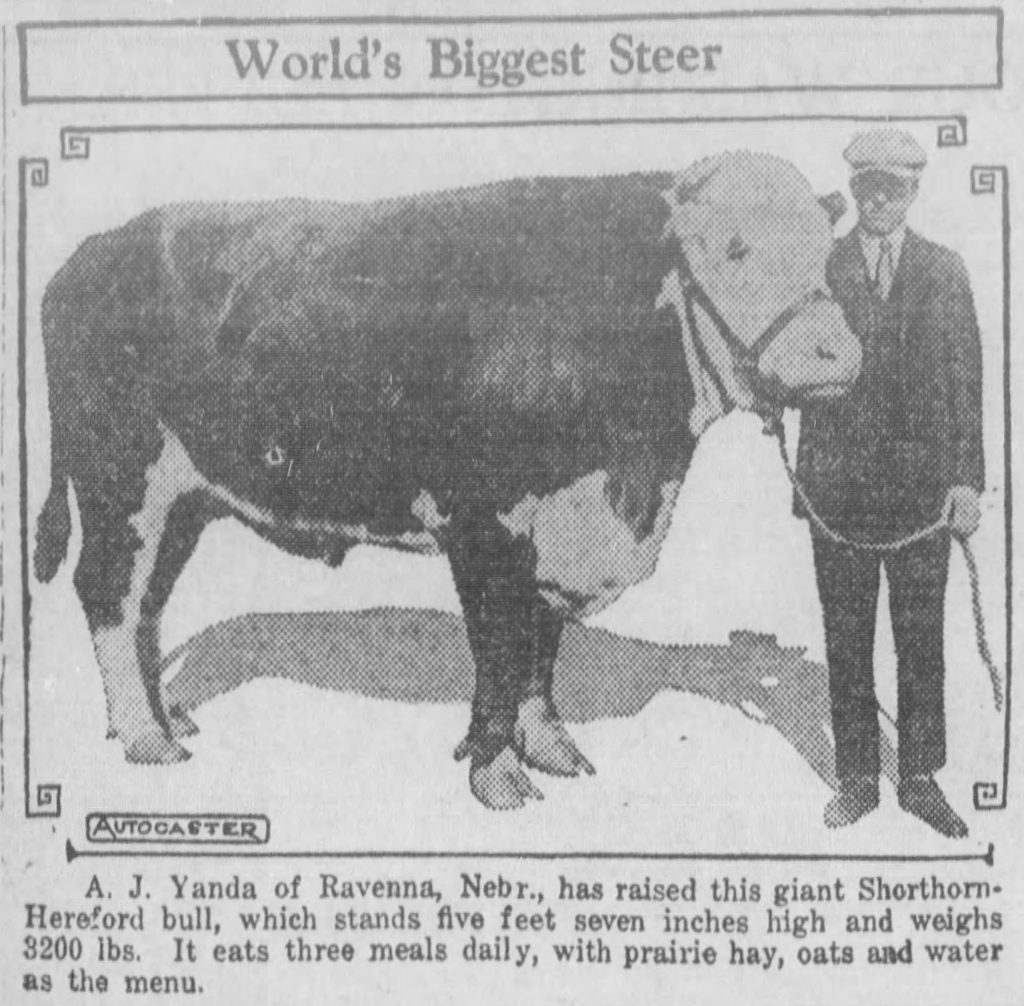 From 1930 comes this photo of a cow named Texas Pride. Though nearly 6 feet high at the shoulders, its horns added another foot and a half. The offspring of a Jersey cow and a Brahma bull, Texas Pride weighed in at 1 ton. [Read more about Texas Pride here.] 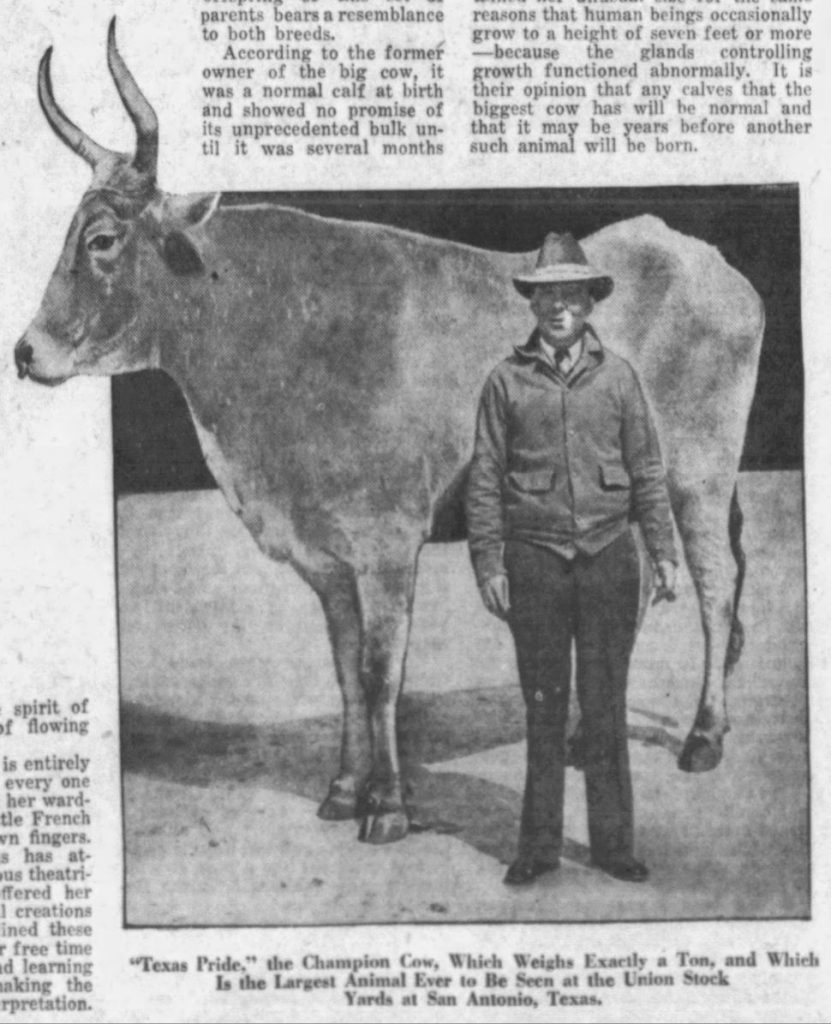 In 1933, you could’ve earned $500 if you managed to find a cow bigger than Lone Star, from Texas. Another Jersey-Brahma mix, this cow was 6 feet and 1 inch high and weighed 2,800 pounds. The distance from its nose to the tip of its tail was 15 feet! [Read more about Lone Star here.] 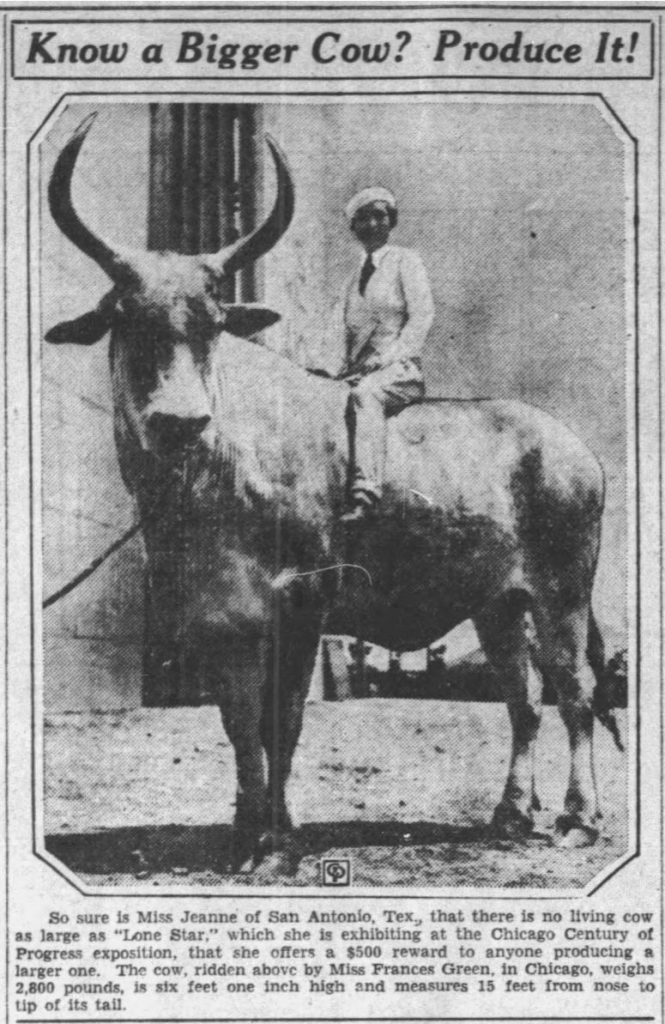 Then we have this giant steer from Kentucky, apparently also named Big Jim like the first steer on our list. This Big Jim stood 6 feet 2 inches and weighed 4,026 pounds. 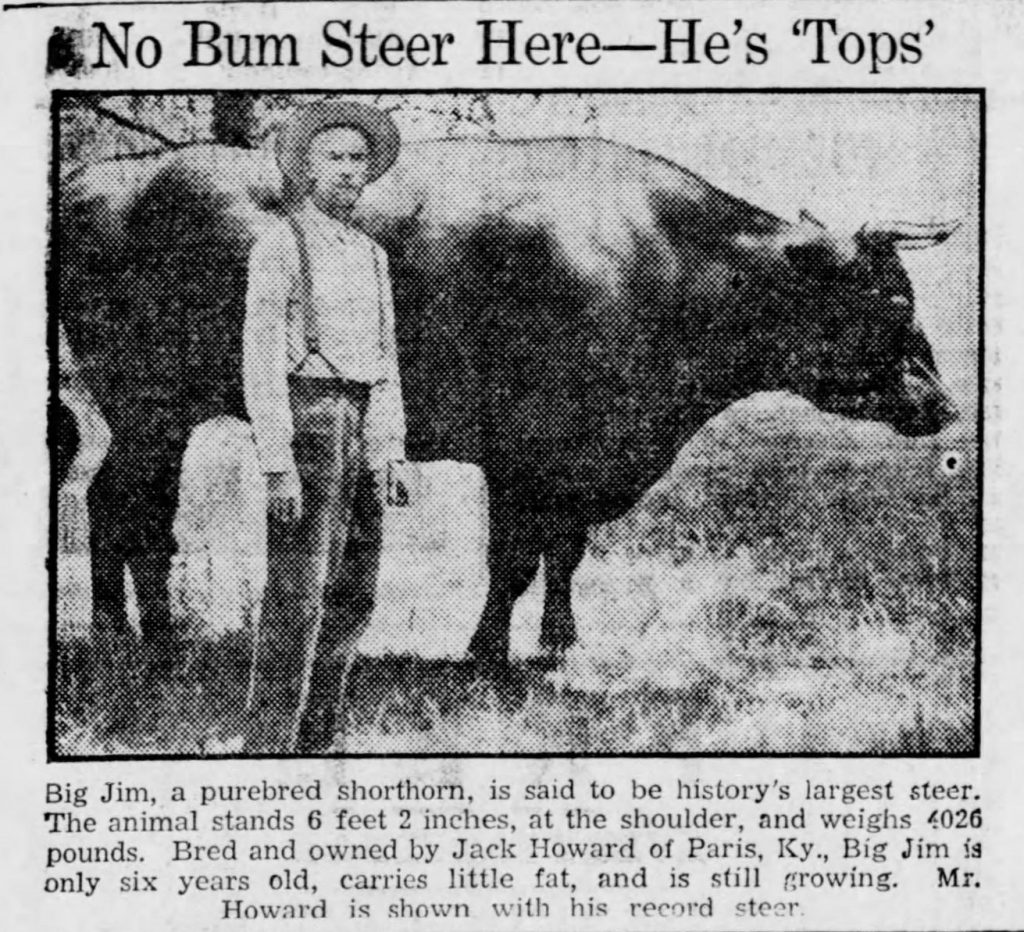 Last up, we have two bovines that tie in height with Knickers. First is this Brahma-Shorthorn steer from 1973 named Satan. Though tying with Knickers in height, this steer outweighed him, weighing in at 2 tons. 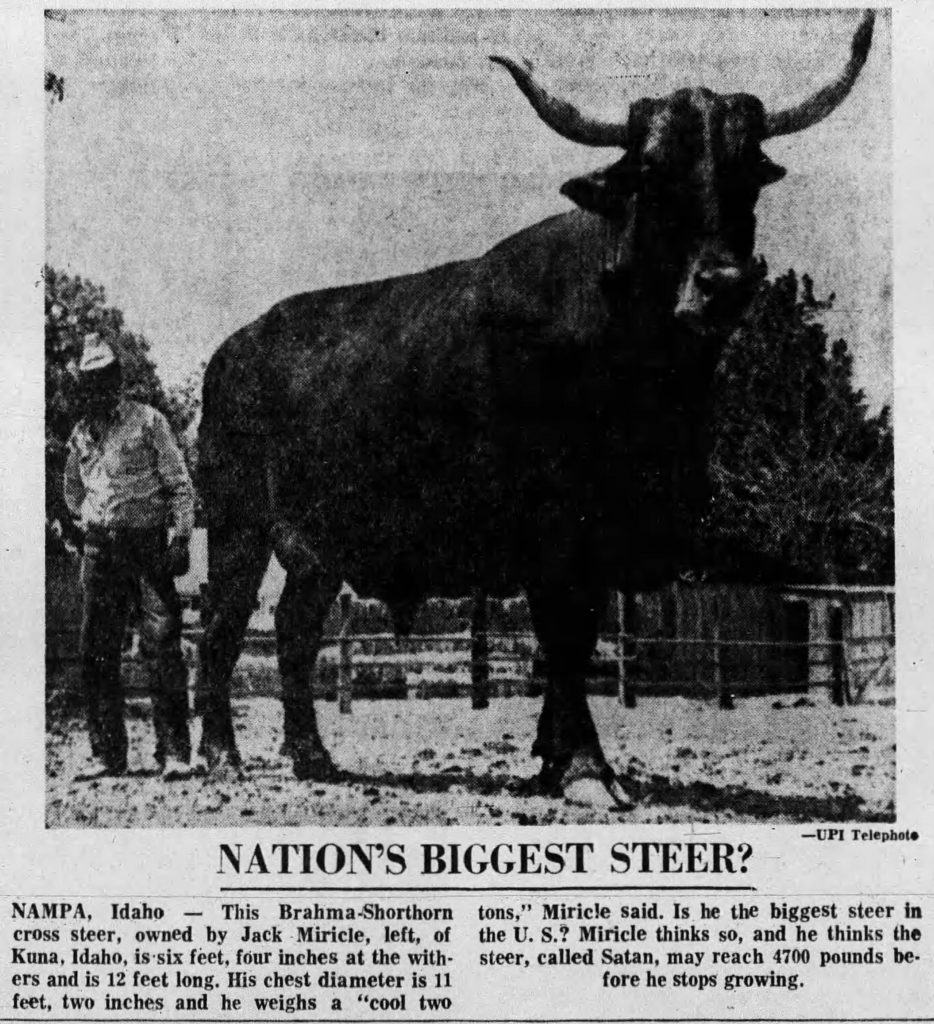 The other 6 foot 4 inch bovine we found is Blosom, a cow from Illinois. In 2014, Blosom made it into the Guinness Book of World Records for her height. [Read more about Blosom here.] 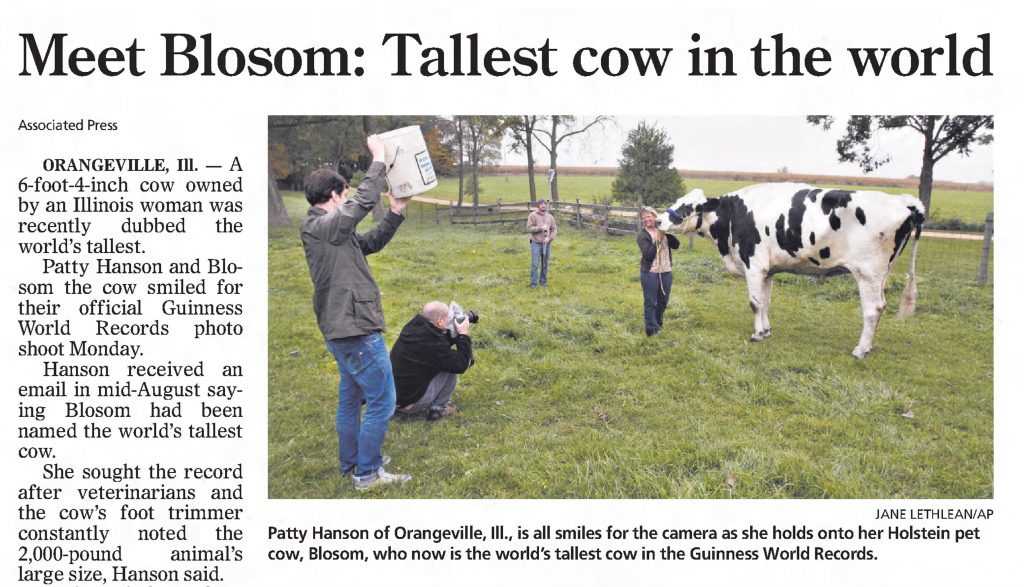 3 thoughts on “Cowabunga! 8 of the Biggest Bovines to Udderly Amoose You”