A mutilated corpse in a shoebox. Nationwide press coverage. A possible connection to a major historical event. Not to mention, a ghost . . .

A baffling 130-year-old unsolved murder from Connecticut has all this and more.

Is your interest piqued? Join us as we use the historical papers on Newspapers.com to uncover the details of the strange and tragic Wallingford Shoebox Murder mystery.

On Sunday, August 8, 1886, Edward Terrell took his dog out berry hunting on the outskirts of the Connecticut town of Wallingford. They were on a little-used wooded path when the dog discovered a large wooden shoebox partially hidden in the bushes and became agitated. As Terrell neared the box to investigate, however, he was overwhelmed by the stench coming from it.

Perhaps with the memory of a dead body he had discovered a few weeks prior on his mind, the man left the box unopened and returned with a few others. When the group of men pried opened the box, they at first thought it held a dead animal. What it actually contained would send shockwaves through Wallingford for weeks.

Inside, wrapped in tar paper, was the nude torso of a man, with the head, arms, and legs cut off. Bloody straw lined the box’s interior.

The authorities were quickly sent for, and word of the discovery spread like wildfire among the town’s population of approximately 6,000.

What the Body Revealed

The medical examiner’s autopsy determined that the torso likely belonged to a man around age 25, weighing approximately 150 pounds. The time of death was placed 5-10 days prior.

From the amount of blood in the box, it was believed that the body had been placed inside immediately after the head and limbs were severed, and the cuts appeared to have been done by a knife or other non-serrated blade. Apart from the obvious dismemberment, there were no other visible wounds on the corpse. Speculation in the press that it had been the work of medical students was quickly discounted.

The body was buried the day after the discovery, but first the stomach was removed and sent to New Haven for examination. The analysis of the stomach would later reveal the presence of arsenic, leading to the conclusion that the man had been poisoned.

With no head, the corpse proved impossible to identify. At first, the most common theory was that it was Albert J. Cooley, a veteran who had recently collected a large sum of pension money and hadn’t been seen since. (Cooley would soon be spotted alive, eliminating him as a possible victim.) Another potential victim was Charles Hall—an arsonist speculated to have been killed by his accomplices. Other missing men were investigated as well, but none were ever identified as the body.

Over the following days and weeks, the investigation turned up a variety of potential clues.

The main piece of evidence was the box the torso was discovered in. It was a large wooden shoebox, about 30×18 inches (sometimes reported as 30×12 inches). Marked on the outside was the type of shoes it had originally contained. Also on the exterior were the remains of an address, but most of this had been removed, leaving only the manufacturer’s mark.

A week or so after the discovery, the constable on the case found pieces of scalp with dark hair near the box’s original location. Almost 2 months later, a farmer discovered arms and legs wrapped in tar paper that were assumed to belong to the corpse.

But these and other potential clues ultimately led nowhere. For instance, reports that a mysterious bag had been discovered in a local well came to nothing, because by the time the authorities had arrived to investigate, the bag had disappeared—if it had ever actually been there.

People claiming to have information relevant to the case came forward, but their stories didn’t provide any useful leads.

One was a boy who claimed to have seen the box more than a week before Terrell discovered it. Another was a young woman who reported that a stranger dressed in bloody clothes and carrying a large bundle had knocked on her door about a week prior, asking for the location of a certain pond. Never having heard of the pond in question, the woman directed him to a nearby river and reportedly saw him pass by a while later in clean clothes and without the bundle.

In October, a local woman was arrested and questioned but was released after it was determined she couldn’t shed light on the case.

The mysterious story made the local news every day in the first weeks, also getting coverage from major papers as far away as California. However, as is often the case in historical newspapers, the details of the murder differed from paper to paper.

After months of no solid leads, the murder dropped out of even local newspapers, except for occasional articles teasing new leads—which never seemed to actually materialize.

Then 6 months after the murder, in February 1887, the Wallingford Shoebox Mystery made it back into national newspapers. Investigation into the provenance of the shoebox—and of a valise (small suitcase) thought to be connected to the case—had led detectives to Chicago.

Seizing on the Chicago connection, newspapers speculated that the dead man was a suspect in the infamous Haymarket bombing of May 1886. The theory, which was tenuous at best, claimed that the man had been killed in Chicago after the bombing and his body shipped to Wallingford for disposal—supposedly because Connecticut had a reputation for unsolved murders.

After the rush of articles trying to tie the dead man to the Haymarket Riot, the Shoebox Murder mostly faded from newspapers in the following decades—apart from an annual mention in local papers on its anniversary and its being used as a comparison for other baffling local cases. In all, the state spent $686 (roughly $20,000 today) on the case but never discovered the identities of the murderer or the victim.

Then 40 years after the murder, in 1926, the police chief who had worked the case claimed in a newspaper interview that he knew the truth behind the unsolved mystery. However, he refused to reveal what he knew, allegedly to protect the murderer’s family. Although his claim didn’t reveal the perpetrator, it did lead one woman to come forward to question whether the victim could have been her father. 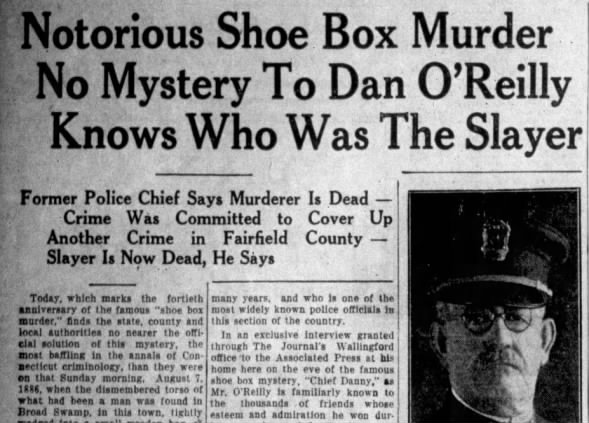 After the murder passed out of living memory, it only sporadically appeared in the papers until its 100th anniversary in the mid-1980s. However, reminders of the case lingered in local newspaper mentions of Wallingford’s “Shoe Box Road,” which had been named for the grisly discovery.

A Haunting in Wallingford

Most recently, in 2016, the murder was featured in an episode of the ghost-hunting reality show Kindred Spirits, which investigated a haunting in Wallingford. But unfortunately, the shoebox ghost didn’t use his television debut to reveal who he was or who had murdered him, leaving the case unsolved to this day.

Read news coverage of the Wallingford Shoebox Mystery on Newspapers.com. Or explore our archive of true crime stories.