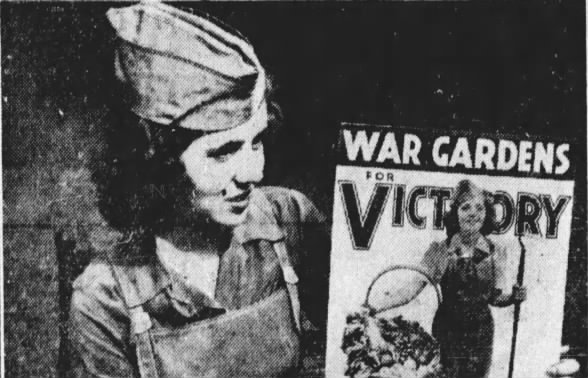 Would you “garden for victory?” During World War II, Americans were encouraged to grow vegetable gardens to help with the home-front war effort. These “Victory Gardens” flourished around the country during the war years, providing an estimated 40 percent of the fresh vegetables Americans ate.

Curious about these gardens? We looked through WWII-era papers on Newspapers.com to learn more about wartime Victory Gardens in the United States!

America’s World War II Victory Gardens were actually a revival of a World War I gardening effort supported by the U.S. government. Starting in 1917, the government had successfully encouraged Americans to grow vegetables at home to free up food for soldiers and allies overseas. When the war ended, however, many people no longer saw a reason to maintain their gardens. 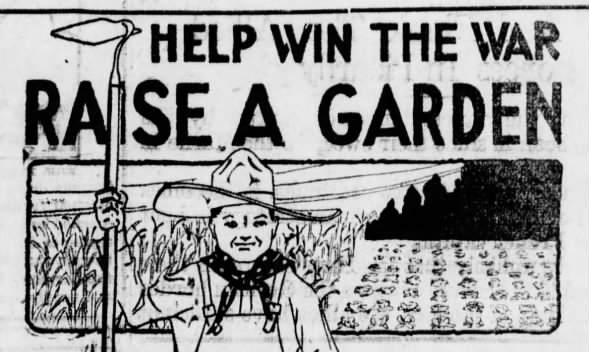 But when war broke out again in Europe in 1939, some Americans began to predict there would again be a need for more vegetable gardens, even though the United States hadn’t officially entered the war yet. Interest in wartime gardens began to grow, despite some opposing arguments that they were unnecessary and potentially harmful to farmers’ livelihoods.

Then, with the attack on Pearl Harbor in December 1941 and the beginning of food rationing shortly afterward, war gardens began taking off in the United States. 1942 saw a sharp increase in the number of newspaper articles about growing wartime gardens—usually called Victory Gardens but also sometimes referred to as “war gardens” or “gardens for defense.”

Many of the newspaper gardening articles from the spring of 1942 focused on the need for efficiency. Numerous articles emphasized that Americans should avoid repeating the “mistakes” of World War I, when people were so enthusiastic about war gardens that they tore up lawns and parks to put in vegetable gardens without considering factors like soil quality. Some articles even discouraged inexperienced gardeners from planting Victory Gardens altogether to avoid inefficiency and waste. 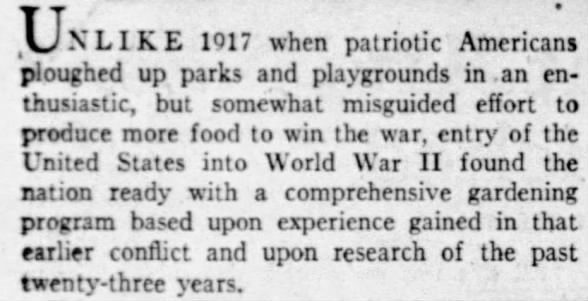 But as World War II lengthened, even amateur gardeners were encouraged to grow Victory Gardens, and 1943 and 1944 saw home vegetable gardens reach their peak popularity.

During this time, Victory Gardens were often portrayed as a patriotic duty. Americans were told that growing a vegetable garden would help free up food for soldiers, and that eating local produce would reduce the strain on America’s transportation network. In many cases, Victory Gardens served as morale boosters as well, helping home gardeners feel they were contributing to the war effort.

As Victory Gardens grew in popularity, cities and states created their own committees and initiatives to support local gardening efforts, which were now actively encouraged by the U.S. Department of Agriculture and President Roosevelt. Some cities offered lower water rates for Victory Gardens, while other communities sponsored Victory Garden contests.

Newspapers published a huge amount of gardening content during these years—from how-to guides, to garden diagrams, to planting schedules. Newspapers also published helpful columns about how to can and preserve Victory Garden produce, and the Boston Globe even offered to test people’s garden soil for free. Inevitably, wartime gardening made its way into newspaper ads as well—with Victory Garden imagery and slogans being used to sell products from seeds to beer. 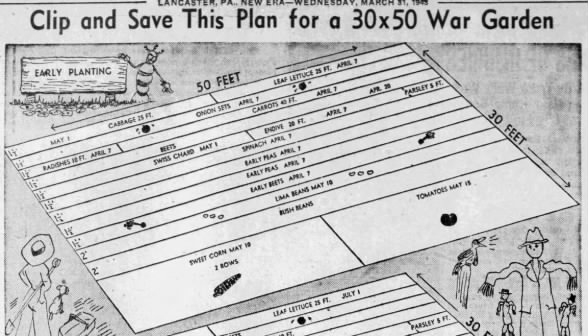 Of course, not everyone had room to grow a backyard garden. City dwellers grew gardens where they could, from window boxes to rooftops. Other Victory Gardens were grown at schools and workplaces, or in community plots established both in and outside of cities. Some newspapers even pitched in to try to help people find places to plant gardens by publishing surveys to identify unused plots.

1945 was the beginning of the end for Victory Gardens. With the war winding down, fewer people saw a need for home gardens, even though the government was still encouraging people to plant them. And once the war ended, Americans planted even fewer Victory Gardens in 1946 and 1947.

But wartime gardens had produced very real results. In 1942 there had been an estimated 16 million Victory Gardens in the United States; by 1944, this number had grown to 20 million. And these home gardens had produced a huge amount of food each year—roughly 8 million tons, or more than 40 percent of fresh fruits and vegetables eaten by Americans. Do you have any memories or family stories about Victory Gardens? Share them with us in the comments!