On August 21, 1986, a rare natural disaster occurred in the West African country of Cameroon when a large cloud of carbon dioxide gas spewed from Lake Nyos and blanketed nearby villages killing 1,746 people and 3,500 livestock while they slept.

The event, known as a limnic eruption, occurs when carbon dioxide builds in colder, deep lake water creating a heavy layer on the bottom. The weight of the warmer, upper layer of water forms a lid that keeps the gas down — much like a cork on a bottle. 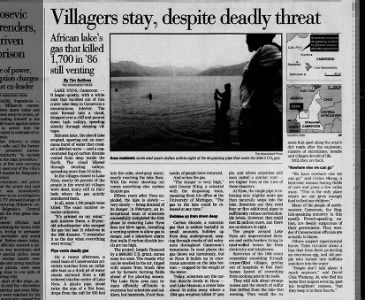 Eventually, the gas in Lake Nyos built up to a point that it was released in a massive eruption that created a 330-foot high column of water and a 200-foot wave. Scientists wondered what caused the cork to pop.

Sule Umare, a cattle herder from Cameroon described the event that killed 99% of the people in his village. “We thought that rain was coming,” he recalled. “I went out and saw the moon shining. I wondered how rain could come without clouds.” Sule was enveloped in a flood of carbon dioxide before he lost consciousness.

Another survivor, Margaret Wandia remembers she was, “breathing very hard and had no strength.” She woke to find three of her four daughters dead beside her.

Some scientists concluded that an underwater landslide disrupted the layers and caused the gas to bubble up that fateful day. Others wondered if volcanic magma below the lake caused the release.

While studying the lake, scientists realized gas levels were rising again. They concluded that gas was gradually leaking into the lake from deep in the earth. In order to prevent a future explosion, scientists started venting the gas with a 672-foot pipe, that when lowered to the bottom, performed like a big straw – sucking the gas upward where it vented gradually into the air.

A second Cameroon lake experienced a similar, but smaller eruption in 1984 and 37 people died.

If you’d like to learn more about the disaster at Lake Nyos, search our archives!