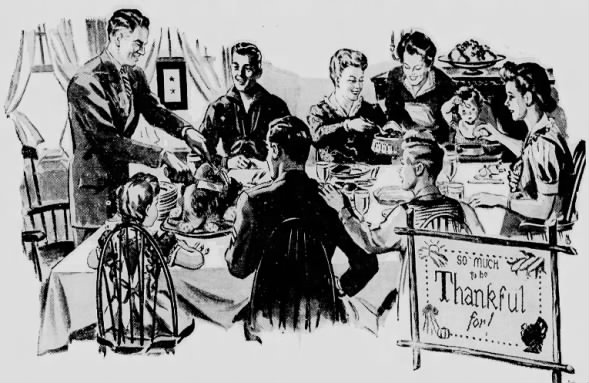 November 1944 found the United States celebrating its third Thanksgiving since entering World War II. And the war certainly wasn’t taking a break for the holiday, with Americans opening their newspapers Thanksgiving morning to headlines like “50,000 Nazis Trapped on Rhine” and “Germans Fire Rocket Bombs at U.S. Army.”

But the war wasn’t the only conflict brewing on Thanksgiving 75 years ago; there was also a ruckus much closer to home

The date of Thanksgiving was causing a stir in the U.S.—the result of federal legislation passed in 1941 declaring that Thanksgiving be celebrated on the fourth Thursday rather than the traditional last Thursday. So while 1944 saw the majority of Americans celebrating Thanksgiving on the 23rd, a few states were still holding on to custom and celebrating on the 30th.

LEARN MORE: Read our post about the fight over the date of Thanksgiving

Other beloved traditions had to change as well on that Thanksgiving. There had been no Macy’s Thanksgiving Day Parade since 1941, for example, since the company had donated the rubber in its famous balloons to the war effort. And Thanksgiving Day football games were played in far fewer places around the nation due to the number of men serving in the military.

But then as now, Thanksgiving dinner was the main event of the day, and the war’s effects were seen even at the dinner table.

By 1944, millions of American men and women were serving in the armed forces domestically or overseas, leaving empty spaces at the holiday table in many homes. In cities near military bases, some of these empty chairs were filled by servicemen and women who had been invited to share a homecooked meal for the holidays with a local family. In other homes, Thanksgiving dinner was held earlier or later than usual to accommodate family members who were working the holiday in factories and other war industries. 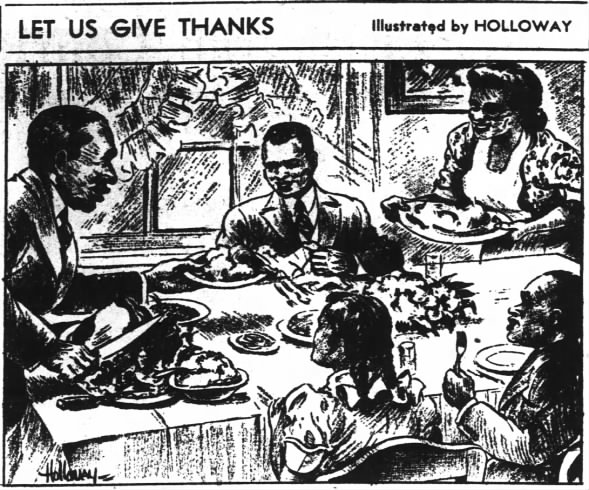 Even traveling to the homes of distant family members or friends for Thanksgiving dinner was curtailed, since gasoline and tires were rationed and bus and train travel were discouraged to open up seats for servicemen and women on furlough.

When it came to the Thanksgiving menu, the war’s influence was seen yet again—this time in the form of food rationing.

By 1944, Americans had been through two previous Thanksgivings under rationing. Sugar was still rationed that year, as were cheese, butter and margarine, and canned fruit—creating a challenge for home cooks hoping to make favorite Thanksgiving dishes.

But Americans had reason to be grateful, as fewer food items than before were being rationed in the United States by November 1944. Lard, shortening, and coffee were no longer rationed, for example, and items such as red meat and processed foods were experiencing a temporary reprieve.

Still, Thanksgiving dinner in 1944 required more planning ahead than in the pre-war years. Those who had heeded the government’s call to grow Victory Gardens could cook Thanksgiving dishes with the produce they had canned or preserved. Other Americans made sure to save up rationing stamps to purchase ingredients for their Thanksgiving meal—aided by newspaper rationing calendars that listed which rationing stamps could be used when and for what products.

But even food items that weren’t rationed could still be scarce. Such was the case in 1944 with the Thanksgiving centerpiece—turkey. Due to the military’s huge demand for turkey for the troops, the bird was hard to buy in some parts of the country—unless a person was willing to turn to the black market.

Spices and other imported food items also could be difficult to find because the war affected shipping. And non-local produce was limited too in some locations due to the effect of gasoline rationing on trucking.

With this changing availability of food on the minds of many, newspapers published articles about which items were expected to be available for Thanksgiving that year. And Thanksgiving recipes using alternative ingredients became a popular feature in many newspaper food sections.

A Spirit of Sacrifice

Despite the challenges and changes that Thanksgiving 1944 presented to Americans on the home front, people were generally willing to sacrifice for the war effort—especially when they considered how much their servicemen and women were sacrificing overseas.

One newspaper editorial published on Thanksgiving reflected on this spirit of sacrifice, remarking: 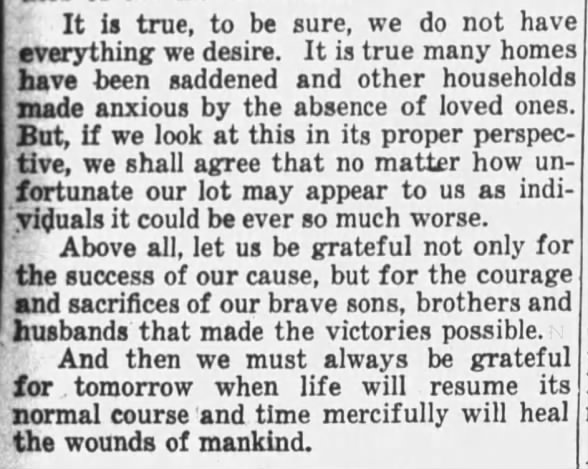