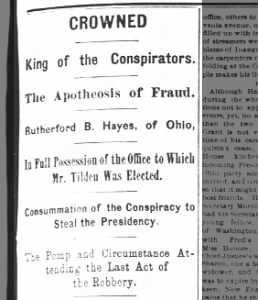 2016 is far from the first time America has experienced a contentious election. With Newspapers.com, you can learn all about the controversies of elections past from historical articles written by the people who had to vote in them. Let’s take a look at three of the most sensational elections in American history:

The election of 1800 created so much drama that it resulted in a Constitutional amendment. Under the original system, each person in the Electoral College got two votes: the candidate who got the most votes (as long as it was a majority) became president, and the person in second place would become vice president, whether or not the two were from the same party. In 1800, Thomas Jefferson and Aaron Burr (both of the Democratic-Republican Party) tied at 73 votes in the Electoral College. The election went to the House of Representatives for a decision, and Alexander Hamilton (former secretary of the treasury) convinced his fellow Federalists to vote for Jefferson. Although Hamilton disliked Jefferson, he disliked Burr more. Burr would eventually kill Hamilton in a duel a few years later.

The election of 1824 likewise had to go to the House of Representatives for a decision. All four candidates were Democratic-Republicans: war-hero Andrew Jackson, Secretary of State John Quincy Adams, Secretary of the Treasury William Crawford, and House Speaker Henry Clay. Although Jackson won the popular vote, he only won a plurality of Electoral College votes (rather than a majority), so it was up to the House of Representatives to decide the election. Henry Clay (who got the least electoral votes and was thus no longer under consideration for president) got his supporters to switch to Adams, making Adams president instead of Jackson. Adams, in turn, made Clay his secretary of state in what Jackson called a “corrupt bargain.”

The election of 1876 was perhaps the most contested of the three elections. It pitted Republican Rutherford B. Hayes against Democrat Henry Tilden. Tilden won the popular vote but was one electoral vote short of a majority, with 20 electoral votes yet to be tallied due to various controversies. Congress appointed a commission to award the remaining votes, and all 20 were given to Hayes, which gave him the majority. When Democrats threatened to contest the results, the matter was settled with a behind-the-scenes agreement that made Hayes president but essentially ended Reconstruction in the South.

Learn more about elections throughout America’s history by searching or browsing on Newspapers.com!