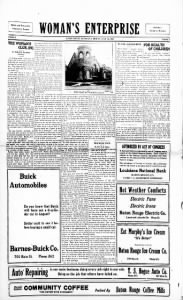 In honor of Women’s History Month, let’s take a look at some of the papers on Newspapers.com that were run by women. Even those papers with only a few issues available are a fascinating and worthwhile read, as all these papers provide a window into the unique role of women in the newspaper business, as well as into how their papers addressed women’s issues and interests.

Women’s Enterprise was a monthly paper based in Baton Rouge, Louisiana, published by Mattie B. McGrath. Geared toward female readers, it began publishing in 1921, soon after women were given universal suffrage, and it encouraged women to vote and be involved in civic matters. It also often featured articles about women’s education, employment, and volunteer work, as well as ones about local buildings and institutions, fashion, and cooking.

The Windham County Democrat, which ran from the 1830s to 1850s in Brattleboro, Vermont, was originally published by George W. Nichols. But after he fell ill in the 1840s, his wife (and former editorial assistant), Clarina Howard Nichols, began running the paper, which she continued to do for the next decade. Though the Democrat was a fairly typical newspaper under her husband, Clarina turned it into more of a literary- and reform-based paper that dealt with issues like women’s rights, abolition, and temperance.

In 1896, Sabrie Akin founded the Labor World, whose mission, like its title suggests, was to cover labor and union issues, mostly in its hometown of Duluth, Minnesota, and nearby Superior, Wisconsin. Sabrie ran the paper until 1900, when she died suddenly, after which it passed on to other editors. 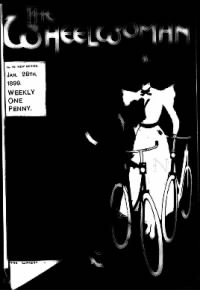 The Soldiers’ Journal was founded by Amy Morris Bradley in Virginia during the final years of the Civil War. Amy served as a nurse and as an administrator of the U.S. Sanitary Commission during the war and began publishing her paper for a nearby Union camp to keep the soldiers updated on military news. Her distribution grew to include such figures as Abraham Lincoln and Ulysses S. Grant.

The Wheelwoman was first published in London, England, by Mabel Edwards and her partner, Charles F. Rideal, in 1896 and catered to “the 70,000 or so lady cyclists throughout the world.” The paper was filled with ads, articles, interviews, and advice, all geared toward female bicyclists of the Victorian period.

Interested in more papers run by women? Try browsing the Champion, the New Northwest, the St. Cloud Visiter and St. Cloud Democrat, the Era-Leader, the Lexington Record, and the Honolulu Times.