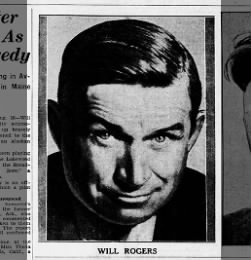 On August 15, 1935, Will Rogers, one of the most beloved American celebrities at the time, died at age 55 in a plane crash in Alaska along with the plane’s pilot, famous aviator Wiley Post.

Will Rogers, born in 1879 in what is now Oklahoma, began his career as a cowboy. But in his twenties, he moved on to life in the public eye as a vaudeville performer, showing crowds his skill with the lariat and soon incorporating in to his act what would become his trademark humor. His popularity led to a successful career on Broadway, on the radio, and in silent (and later, talking) movies. In 1934, the year before his death, he was the biggest box-office draw in Hollywood. 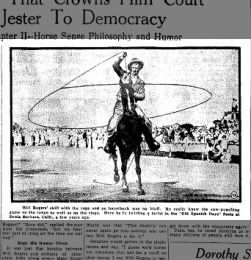 Rogers was also the most-read newspaper columnist in the country, taking on a wide range of current events and political topics with his good-natured humor. He famously wrote, “I joked about every prominent man of my time, but I never met a man I didn’t like.”

Always up for an adventure, Rogers enjoyed traveling the world and became a major supporter of the nascent aviation industry. He became friends with famed pilot Wiley Post, the first pilot to fly solo around the world. In early August 1935, Rogers joined Post on his mission in Alaska to survey air routes between the U.S. and Russia.

The pair decided to fly to Point Barrow, Alaska, the northernmost point of U.S. territory. The day of their flight, the dangerous 500-mile journey was complicated by extremely poor visibility. Unsure of exactly where they were, the two men landed in a lagoon near Point Barrow to ask a group of Inuit for directions. Just after taking off again, the plane crashed back into the lagoon at 8:18 p.m., killing Rogers and Post instantly. 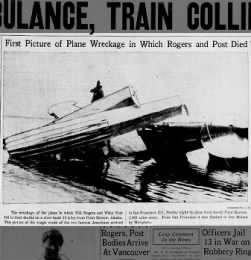 When news of Rogers’ death reached the States, the nation was stunned, and newspapers carried the story as their top headline. Thousands of people attended his Hollywood memorial service, and Rogers was buried first in California then later moved to Oklahoma.

Do you have any memories of Will Rogers? Share them with us! Or find more articles about his career and life by searching Newspapers.com.