On this day in 1876, famous gunfighter “Wild Bill” Hickok was shot in the back of the head. He died on the spot without ever seeing his murderer, the young, up-and-coming gunslinger Jack McCall. 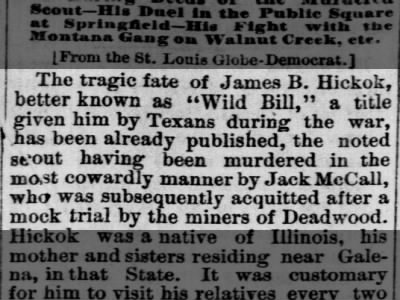 Wild Bill, born James Butler Hickok, gained notoriety in the west thanks to accounts (often exaggerated) of his impressive gunfighting and accurate aim. Much of his shootouts took place during his sporadic career as a lawman, from 1865-1871. During an 1871 shootout with saloon owner Phil Coe, Hickok accidentally shot and killed Mike Williams, a Special Deputy Marshall who had run into the shootout to help Hickok. This event reportedly affected Hickok deeply for the remainder of his days and he was relieved of his duties as marshall soon after the incident.

Legends tend to disagree on just how many men Hickok killed, but the numbers are likely inflated. Eventually his eyesight began to give out on him and, after a brief stint in Buffalo Bill’s show Scouts of the Plains, he turned to poker. 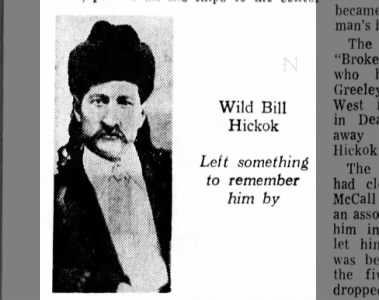 Hickok always insisted on sitting with his back to a wall, a precaution against being surprised from behind. On the day he died, there was only one open seat at the poker table and it left Hickok’s back to the saloon door. He asked to switch seats a couple of times with no luck. Soon enough, Jack McCall walked in and shot Hickok at point-blank range. The four cards Hickok was holding as he died—two black aces and two black eights—have since become known as the “dead man’s hand.” 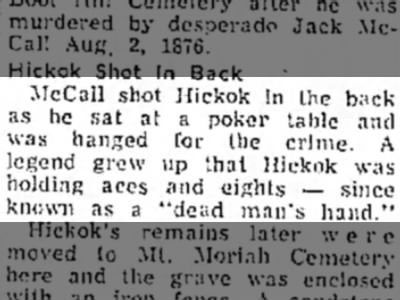 McCall’s reasons for killing the famous “Wild Bill” may never be known for sure. He was reportedly bitter after losing badly at the same table as Hickok the day before, but in his trial he claimed that Hickok had killed his brother during his time as a lawman in Abilene, Kansas. McCall was acquitted by the informal mining town jury that first brought him to trial, but was later rearrested and judged guilty. He was hanged in March of 1877.

Read more about Hickok and his adventurous wild west life in the articles of Newspapers.com.