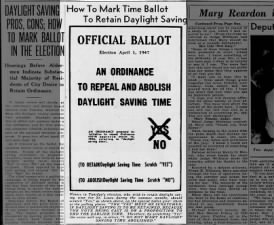 America first implemented a partial-year daylight saving time in March 1918, during World War I, and though there was popular support for the wartime measure, there was also disapproval, primarily from farmers and the railroads. The national daylight saving time was repealed after the war ended, but it continued on at the local level, especially in the North, East, and parts of the Midwest.

Want to learn more about the history of daylight saving time? Start a search on Newpapers.com!