In January of 1947, the mutilated body of a woman, drained of blood and severed at the waist, was found in an empty lot in Los Angeles, California. Though the victim known as the “Black Dahlia” was eventually identified as 22-year-old Elizabeth Short, her killer was never brought to justice. The Black Dahlia case has since become one of the most famous unsolved mysteries in America.

The case was notable for the brutal details of the murder, and for the resulting decades-long investigation that yielded hundreds of suspects but no firm answers. The disturbing history of the LA doctor often linked with this case, George Hodel, makes him a grimly compelling suspect. His is a name well-associated with the case thanks mostly to his son, ex-detective Steve Hodel.

George Hodel may have been a successful doctor, but he was not a good man. In 1945, he came under suspicion as the potential murderer of his secretary Ruth Spaulding, though her death was listed as an accidental overdose. He became a prime suspect in the 1947 Black Dahlia case when Short’s injuries revealed the murderer probably had surgical expertise. In 1949, two years after the Dahlia murder, Hodel’s daughter, Tamar Hodel, accused her father of incest. He was tried and acquitted of those charges, but the whole situation strengthened the case against him as a suspect in the Black Dahlia murder.

There were a few other peculiarities that seem to point at Hodel’s guilt. His black 1936 Packard resembled descriptions of a black car seen near the empty lot the same day Short’s body was found. He had a delivery of cement bags sent to his house for remodeling the day Short disappeared, and similar bags were found near her body. And only three years after Short’s death, Hodel conveniently left the country to live in the Philippines, where he would remain until 1990.

After George died in 1999, Steve Hodel followed the trail of evidence that he felt proved his father’s guilt. Among his discoveries were photos that looked like Elizabeth Short, though it was never confirmed they were actually her. Perhaps most suspect of all, transcripts were found in old police files from surveillance conducted on George Hodel’s home in 1950:

The tapes also indicate that George had deals with the police. Steve theorizes that his father evaded arrest and prosecution through his high-status connections and bribery. 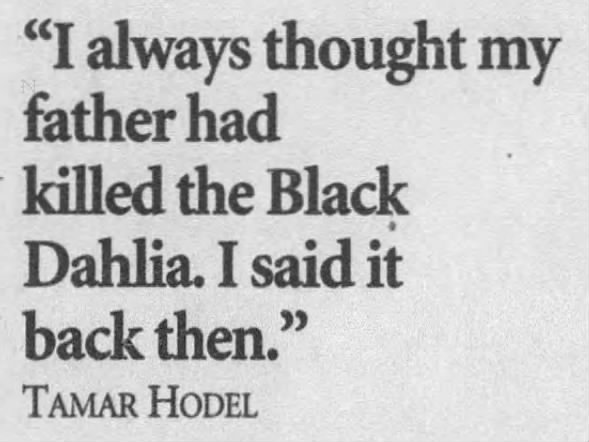 As with all unsolved cases, there’s so much more to this story. There are more theorized connections between Hodel and Short, other suspects who might be responsible, and of course, a whole slew of facts and links lost to time that we will simply never know. For now, George Hodel is still only a suspect, and the Black Dahlia case remains unsolved.

Find hundreds of articles on the Black Dahlia murder and connected suspects, including George Hodel, with a search on Newspapers.com.