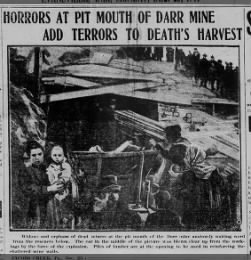 December 1907 was the deadliest month in American coal mining, with a total of five separate mining disasters that together killed more than 700 men and boys in Pennsylvania, West Virginia, Alabama, and New Mexico.

The biggest of these disasters was an explosion that decimated two connected mines in Monongah, West Virginia, on December 6. The explosion happened around 10:30 in the morning and killed at least 360 miners, though the number of dead was likely higher, as men frequently brought their sons to work in the mine off the books.

Newspapers covered the disaster as well as the tragic aftermath, as shown in an excerpt from the Greenville, Pennsylvania, Record-Argus, which reads, “Throughout the night great crowds of wailing women and children congregated about the mine entrances and the scene is heartrending, as all now know that there is not the slightest chance of their loved ones being alive.” 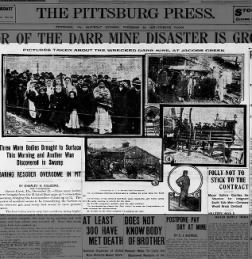 Even more miners would have died if dozens of those of the Roman Catholic faith hadn’t stayed home from work to observe St. Nicholas Day. No official cause of the explosion was determined, though officials speculated gas or coal dust in the mine was likely ignited by a spark or lamp flame. It is still considered America’s worst mining disaster.

The second-deadliest of December’s coal mining disasters occurred at the Darr Mine in western Pennsylvania at 11:30 in the morning on the 19th. This explosion killed at least 239 men and boys, many of them immigrants. As was often the case in those days, the mining company was found not to be at fault, despite accusations of neglect. An inquiry determined that the explosion was most likely caused by an open-flame lamp in an area that had been cordoned off because of high levels of gas. 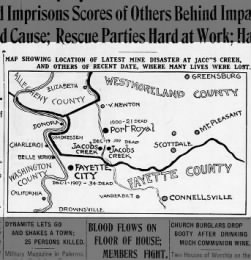 In a twist of fate, the 19th was again St. Nicholas Day (this time for the Eastern churches, which use a different calendar), and it is estimated that possibly hundreds of miners of the Greek Catholic and Orthodox faiths survived because they chose to forego the day’s wages to instead observe the saint’s day. The Darr mine disaster was the worst in Pennsylvania history and the second worst in the United States, following the Monongah disaster.

Do you have any family who worked in the coal mines? Tell us about them! Or learn more about the mining disasters of December 1907—or of any period of American history—on Newspapers.com.