March 25, 1911, was a tragic day at the Triangle Shirtwaist Company in New York City. The business was woefully unprepared when a fire broke out and trapped many of the employees inside. In the end, 145 of the workers at Triangle Shirtwaist perished from fire, asphyxiation, or from falling to their deaths. 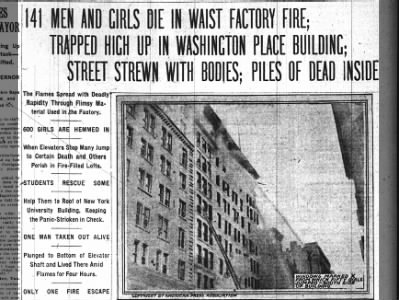 Max Blanck and Isaac Harris owned the 10-story Manhattan building, in which worked hundreds of employees, mostly teenage immigrant women. The workers were crammed together in whatever available space there was, which is bad enough. But the major safety issues came in the form of terrible escape route options. Two stairways led to the street below, but one ended in a door that was kept locked from the outside, and the other opened inward. There were also four elevators, but for whatever reason only one was functioning at the time and it held, at maximum, 12 people. 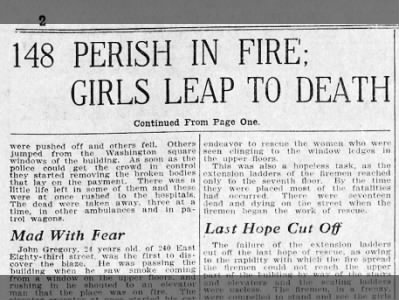 As the fire spread, hundreds found themselves trapped on the upper floors with no escape. Even the single working elevator made only 4 trips, packed with terrified women, before it too could no longer be used. Those left behind hung outside windows for as long as they were able before the fire burned their hands too badly to hold on. Most perished this way, falling to their deaths before they could be rescued. Some jumped down the elevator shaft and met the same fate. Others clung to ledges and were accidentally pushed off by others frantically trying to do the same thing. 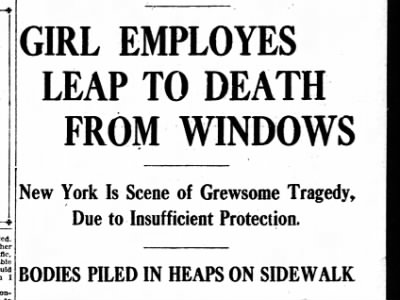 Firemen arrived at the scene after several dozen had already perished, doing what they could with ladders that only reached the 7th floor and nets that broke under the weight of too many people jumping into them. Those who survived the fall from the upper floors were taken to hospitals to recover, but many of those trying to help in the rescue effort had to watch, helpless, as the horrific scene unfolded before them.

Harris and Blanck, who themselves were on the 10th floor when the fire started, escaped by climbing onto the roof and jumping to a nearby building. They already had a history with factory fires suspicious enough to narrow the eyes of even the most forgiving, having apparently set fire to some previous (and mercifully empty) workplaces deliberately to collect the insurance money. Though they did not start this particular fire, they had purposefully omitted certain safety features like sprinklers so that they’d have the option in the future. The two were put on trial for manslaughter but were acquitted. In fact, Harris and Blanck suffered no negative repercussions at all, much to the outrage of friends and family of the victims. 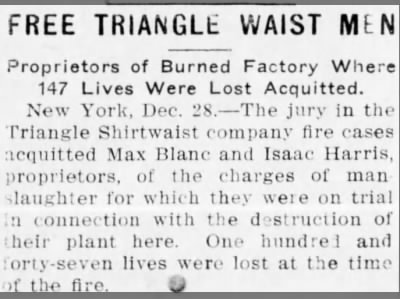 There is one positive side to this horrible piece of history: as a result of so many completely preventable deaths, it became obvious that worker conditions and safety regulations were in dire need of reform, and these reforms were made within the year. The fire also led to the creation of groups that worked to improve conditions for women sweatshop workers in manufacturing. The Triangle Shirtwaist fire remained the worst industrial fire until 1993, when a toy factory in Thailand burned down, killing 188.

Newspapers catch humanity at its best and worst, both the pleasant and the tragic. To read more about the Triangle Shirtwaist fire, the article in this clipping recounts the specific and sobering events of that day, or try this search for more about the fire and what happened as a result.