On March 25, 1911, the Triangle Shirtwaist Factory in New York City caught fire and in about half an hour killed 146 people, the majority of them young women. It remains one of the deadliest workplace disasters in U.S. history. 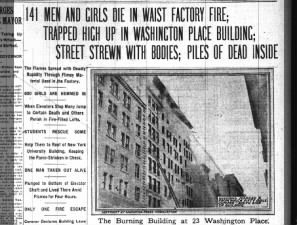 The Triangle Shirtwaist Factory was a sweatshop housed in the top three floors of a 10-story brick building in New York City. The factory was one of the top producers in the country of women’s shirtwaists, and it employed hundreds of workers, mostly young women in their teens and twenties who were Italian or Russian Jewish immigrants.

On March 25, a Saturday, workers at the Triangle Shirtwaist Factory prepared to leave at the end of the day. Employees of other businesses in the building had mostly all already gone home. Around quitting time, smoke was spotted coming from a rag bin beneath a cutting table on the eighth floor at about 4:45 p.m. Workers tried to put out the fire, but it spread too quickly and soon traveled through the elevator shafts and shattered windows to the upper floors.

Workers on the eighth floor tried to escape via the two passenger elevators and two stairwells, and many succeeded. Likewise, many of the workers on the tenth floor were able to evacuate to the roof, where they crossed via ladder to a neighboring building.

The workers on the ninth floor, however, had a much harder time evacuating. The door to one of the stairwells was locked, and the other stairwell quickly became impassible due to smoke and fire. Some tried to use the fire escape, but it soon collapsed under the weight of too many people. Others tried to jump down the elevator shafts, and while some survived this, many others did not. As the fire intensified, dozens of workers began jumping out of the windows, dying upon impact on the ground below, despite the attempts of onlookers to catch them with life nets.

Though the fire department arrived quickly, their ladders only reached the sixth floor, and the fire burned too quickly for them to save many of the people trapped inside. Within about half an hour, the fire was put out, but of the approximately 500 people who worked at the factory that day, 146 died—in the fire, from smoke inhalation, or from jumping to their deaths.

The tragedy proved the impetus for reform, and legislation was passed in New York that improved safety and fire regulations. Although the owners of the factory were put on trial (for the locked door on the ninth floor), there was not enough evidence to prove guilt and they were acquitted.