During WWII, townspeople from Perkasie, Pennsylvania, banded together in a remarkable way to honor and support the young men and women from their community serving in the armed forces. In honor of Veterans Day and those who served, we wanted to share their story! 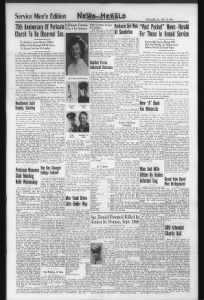 In June 1942, Perkasie community members gathered at the local Fire Hall to organize the Perkasie Community Service Group (C.S.G.). After some discussion, the C.S.G. made a list of things they wanted to accomplish. They agreed to: send a weekly letter to every service member from the community; include a special servicemen’s pocket edition of the News Herald with community news; send each service member a dollar bill once a month.

The effort would require funding and donations. Members went door-to-door soliciting dimes, quarters and dollars.  Benefits and fundraisers were held. Members of the community were each assigned special duties. Some of those responsibilities included addressing envelopes or keeping the mailing list updated. Before the war ended, nearly 800 young people serving from Perkasie would receive 70,000 letters and more than $17,500 from the C.S.G. When a soldier didn’t make it home, the C.S.G. presented the family a Gold Star Flag and a letter of condolence.

Grateful service men and women loved the letters! Many sent expressions of gratitude to the News Herald. Richard E. Moyer was a 21-year-old infantryman who was wounded and sent home. He told the C.S.G. how he and 8 buddies spent months isolated in the Italian war theatre. “No mail, no nothing,” he said, “not even pay reached us for months.” Finally, when communications were re-established, Moyer received a backlog of 196 pieces of mail, but still no paychecks. “Among them were five C.S.G. letters with a buck each. As I opened one, the bill fell out and my buddies gasped ‘real money’, and asked whether my dad sent it. As I continued to open mail and find more dollars, I explained that all the kids from my home-town get a buck-a-month from the community, and my buddies decided they came from the wrong town. We had a glorious time spending the first five dollars we saw in months,” Moyer said.

Sgt. Howard Krout received his letter from the C.S.G., but two bills had inadvertently been placed in the envelope. Several weeks later he returned the extra dollar to the C.S.G. with the explanation, “two bills were sticking together, and I knew that I am entitled to only one.”

Another recipient was 21-year-old seaman Wilbur F. Hendricks. He kept these pocket edition newspapers long after the war ended. Upon his death in 2007, his family donated the newspapers to the Perkasie Historical Society in his honor. His collection is now digitized and available to view for the first time here.

Newspapers.com salutes veterans like Richard Moyer, Howard Krout, and Wilbur Hendricks; and we salute the Perkasie community. How did your hometown support the troops during WWII? Search our archives today to learn more!

One thought on “Town Unites to Honor Soldiers During WWII”