Tip: Using Newspapers to Learn about Your Ancestor’s Life in the Poorhouse

Do you have ancestors who lived in a poorhouse? If so, newspapers are one of the resources you can use to discover what life may have been like for those family members. 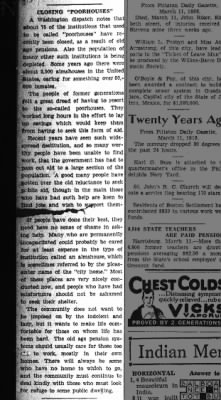 Alternatively called poor farms, county farms, or almshouses (depending on the region of the United States), poorhouses were typically run by counties (or sometimes towns) as a way to take care of people who were poor, old, disabled, or homeless and who had nowhere else to go. In Great Britain, such institutions were more often called workhouses. In the United States, poorhouses began to disappear after the Social Security Act was introduced in 1935, and they had almost totally disappeared by the 1950s.

It can be difficult to find records from poorhouses, so newspapers can be quite valuable in your research. Although individual “inmates” (as they were often called) of poorhouses are rarely mentioned by name in newspapers, you can typically discover quite a bit about the poorhouse they lived in from newspaper articles and piece together a picture of what your ancestor’s life in that poorhouse may have been like. (If you’re not sure if you have any ancestors who lived in a poorhouse, try reading this helpful article by Ancestry for guidance.)

If you know the name of the poorhouse where your ancestor resided, simply search Newspapers.com for the institution’s name to bring up search results. If you are unsure what the name of the poorhouse was in a certain area, use Newspapers.com to search the newspapers in the town or county (or even state) where the poorhouse was located using search terms like “poorhouse,” “county farm,” “poor farm,” or “almshouse.” You can then narrow the results by date range (such as your ancestor’s birth and death dates) if you desire.

If a broader look at poorhouses in America interests you, the St. Louis Star and Times published a series of articles on poorhouses in Missouri in 1922 and 1923 as part of a public awareness campaign to improve conditions in those institutions. Many of these articles paint a vivid picture of what some poorhouses were like at the time and can be quite eye-opening!

Get started learning more about poorhouses by searching on Newspapers.com!

6 Basic Strategies for Searching on Newspapers.com™

Using Newspapers to Learn More from the 1950 U.S. Census

24 thoughts on “Tip: Using Newspapers to Learn about Your Ancestor’s Life in the Poorhouse”