The Vatican’s own “Scarlet Pimpernel”

During the turbulent years of WWII, the Vatican housed an unusual Irish Roman Catholic priest and monseigneur with a penchant for defying and resisting the Nazis. His name was Hugh O’Flaherty, and his aid in helping released Allied POWs remain free in Nazi-occupied Italy led him to be nicknamed “The Scarlet Pimpernel of the Vatican.” 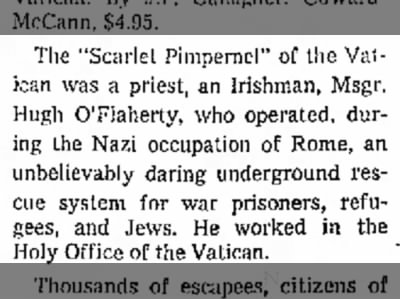 During Italy’s time as an Axis country, O’Flaherty spent much of his time visiting the camps full of war prisoners from the Allied countries. He would search for those thought to be missing in action and tried to send information on their health and safety back to their families using Vatican Radio, the broadcasting service of the Vatican.

In 1943, when Italy left the Axis and joined the Allies, thousands of British POWs were released from the camps. Unfortunately, the subsequent Nazi occupation in Italy meant the freshly freed men were in danger of recapture. Many released POWs remembered O’Flaherty from his days visiting the camps and came to Rome to find him, seeking refuge and hope. Eventually O’Flaherty became a huge thorn in the side of the Nazi leaders who were trying to round up fleeing prisoners and find the men concealing them. 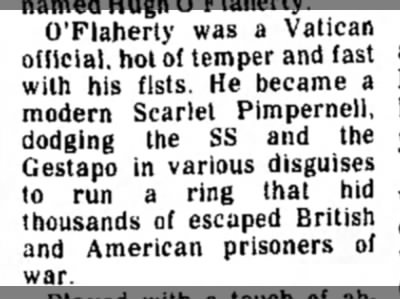 O’Flaherty never hesitated to help a fellow human in danger. He created a network of agents, wore disguises, set up safehouses, and helped over four thousand desperate people—mostly Allied soldiers and Jews—stay hidden in various locations throughout Rome. He escaped arrest and multiple assassination attempts. Even once the Nazis recognized his involvement as the leader of the network, they could not do anything to him while he remained inside the Vatican. So he began to openly help escapees on the very steps of the Vatican, infuriating the Nazi officials who watched. 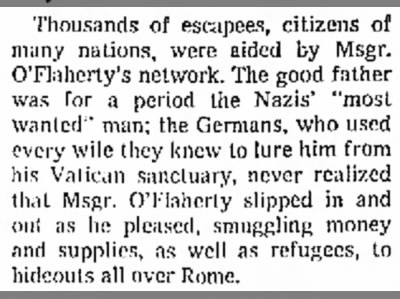 One man in particular, Colonel Herbert Kappler, chief of the SS and Gestapo in Rome, discovered what O’Flaherty was up to and set himself to the task of arresting, killing, or otherwise stopping the Irish priest. He had a white line painted outside the Vatican and made it clear that if O’Flaherty crossed that line, he would be arrested (and probably tortured and killed). Nevertheless, O’Flaherty did manage to covertly cross that line many times and then make it back home unharmed. No matter what Kappler did, O’Flaherty and his network managed to outwit him. When the Allies swept through Rome in 1944, O’Flaherty’s network was still intact and all its beneficiaries safe. O’Flaherty then demanded that any German prisoners be treated properly by the Allied soldiers.

One of these prisoners was Herbert Kappler. After the war O’Flaherty often visited Kappler in prison, his only visitor. In a surprising twist, Kappler eventually converted to Catholicism in 1959–and was baptized by none other than O’Flaherty himself.

Read more about O’Flaherty using this search on Newspapers.com, or more about Kappler (particularly his post-war years) here. There are many more stories from WWII that can be found in history’s newspapers. Try your own search here.