Hugh Troy, a painter noted for his penchant for jokes, performed a few significant pranks in his life. One of these involved poor, unsuspecting, deceased artist Vincent Van Gogh and the grisly tale of his severed ear.

In 1939, Troy was trying to enjoy a rare exhibit of Van Gogh’s paintings, displayed at New York City’s Museum of Modern Art. To Tony’s view, too many of the museum’s visitors were only interested because of the story of Van Gogh cutting off his ear, and were not there to enjoy the art itself. The crowds were keeping serious art admirers from being able to appreciate the exhibit, so Troy came up with a prank to clear the way for those who cared about the art.

As the article below explains, Troy crafted an “ear” using a piece of dried beef and laid it in a display box. He then somehow smuggled that display into the museum beneath a plaque declaring that this was, in fact, the very ear Van Gogh had cut off in 1888. The crowds eagerly gathered around to peer at the hunk of unremarkable meat, leaving the rest of the exhibit open to perusal. 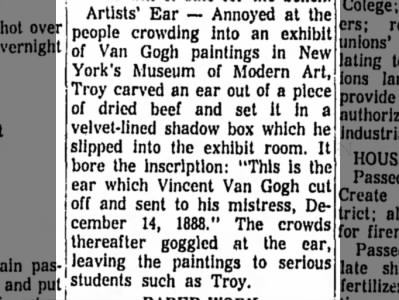 How Troy might have smuggled the display into the museum has not really been explained, and it’s possible that this is more myth than fact. Still, the Van Gogh ear prank holds its place in prank lore as a masterful joke.

Troy is also credited with several other pranks, including one involving a rhinocerous, and another that led to reports for counting dead flies.

For more April Fools’s news from past years try this search, or see what you can find on Newspapers.com using the search or browse pages.