On the morning of October 3, 1849, Edgar Allen Poe was found on the streets of Baltimore delirious, dangerously ill, and dressed in someone else’s clothes. He was taken to the Washington Medical College and treated there for four days before he died, still incoherent, on October 7. The manner of his death was so surprising and so odd that it could not be explained, and Poe was never able to clarify the situation before he died. All medical records were lost, and even now what happened to Poe in the hours leading up to that October morning remain an unsolved mystery. 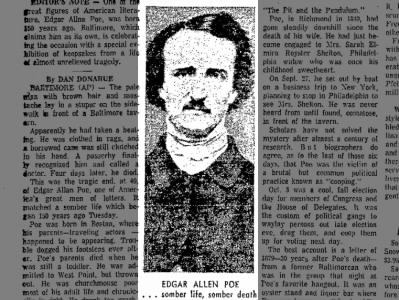 Many causes have been put forward as possible reasons for his behavior and death that week, including cholera, epilepsy, heart disease, and rabies. Drugs or alcohol have also been suggested as contributors to Poe’s early demise. 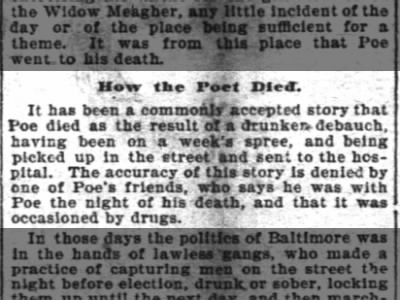 And there is another theory, one that would explain his odd clothes, his delirium, and his need for medical attention when he was found—Poe was a victim of “cooping.” 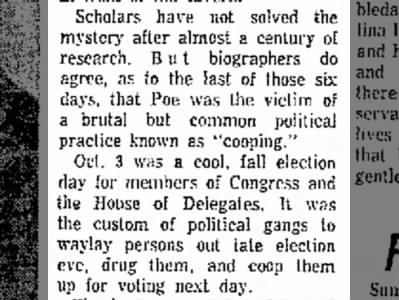 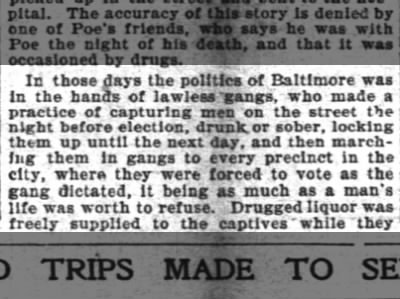 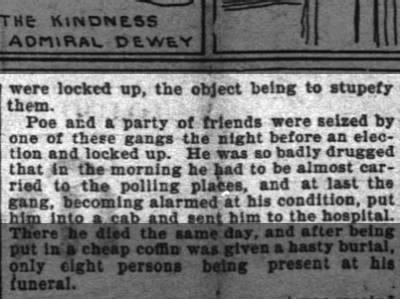 Because the gangs would often dress up their victims in different clothes so they could vote at several locations, Poe’s unusual outfit makes sense under the cooping theory. He would certainly act incoherent and delirious if he’d been drugged the night before. And the fact that he was found on election day certainly helps the theory seem reasonable. But ultimately it is a theory just like any other, and the truth about Poe’s death remains unknown.

Look out for more on this subject in the results of this search on Newspapers.com. Try a topic of your own with the search page, or take a look through the papers using the browse page.