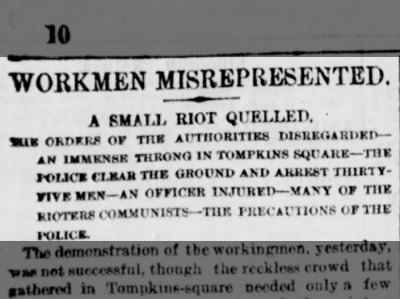 In January of 1874, both Europe and North America were in the midst of an economic depression that left thousands unemployed. It was called the Panic of 1873, though it lasted for several years, and it brought about demonstrations by workers movements throughout the country for better public works programs to aid in providing jobs. But change was slow in coming. 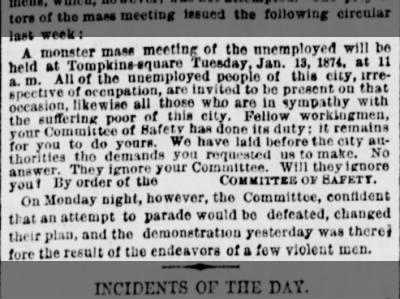 On January 13th, around 7,000 New Yorkers gathered in Tompkins Square Park in New York City. A group called the Committee of Safety had organized the meeting to protest the city’s lack of help creating jobs. Newspapers labeled the Committee a menace and turned civilians against them and the protesters, calling them idlers and ruffians.The night before the demonstration, the Police Board requested that the committee’s permit to meet in the park be revoked. Protesters came anyway, of course, completely unaware that anything had changed.

Just before the meeting was set to start, police entered the square and began to disperse the demonstrators with clubs and force. Mounted police cleared the streets, brutally assaulting anyone in their way. In retaliation the demonstrators fought back—one man even hitting an officer in the head with a hammer—and what had been simply a meeting quickly became mayhem. 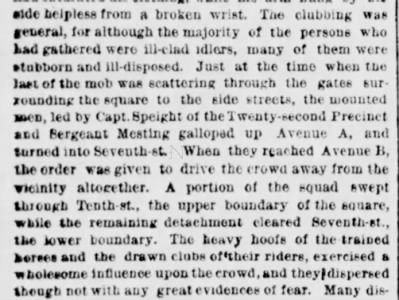 Several dozen arrests were made in the aftermath of the riot. The unemployment movement was basically demolished. Efforts to organize more marches fell through, and the Committee of Safety dissolved itself. There were attempts to fire those on the Police Board, but nothing came of them. The city’s police department only increased its harassment of supposed “radicals” and political organizations.

Check out Newspapers.com‘s collection for more articles like these. Try a search for a any topic here, or take a leisurely stroll through the available papers in the browse section.