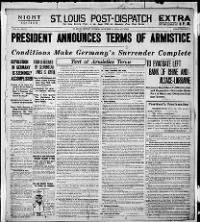 If you have ancestors from Missouri or surrounding areas, come check out the St. Louis Post-Dispatch! Newspapers.com has issues starting from the newspaper’s inception in 1878. Also included under the St. Louis Post-Dispatch title on Newspapers.com are some issues of the paper’s predecessors, the Dispatch and the Evening Post, dating back to 1874. With a Newspapers.com Basic subscription, you can see issues from 1874 through 1922; or, with a Publisher Extra subscription, access the years previously listed and additional issues from 1923 to April 2016.

The Post-Dispatch began publishing in December 1878. It was created by Joseph Pulitzer out of two preexisting papers: the Dispatch and the Evening Post. When the paper was first published, it was called the Post and Dispatch, but within a few months, the title had been shortened to the Post-Dispatch. 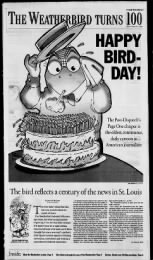 The paper’s first managing editor was John Cockerill, and he and the paper were both embroiled in scandal when Cockerill shot and killed Alonzo Slayback in the Post-Dispatch office in 1882. Slayback had come to the office to confront Cockerill about an insulting article Cockerill had published about Slayback, and Cockerill shot Slayback in what appeared to be self-defense.

As a major paper in the Midwest, the Post-Dispatch carried international, national, regional, and local news. It started out as a four-page paper but quickly grew in length. One long running feature of the paper is the Weatherbird, a small cartoon included on the front page with the weather report. Introduced in 1901, the Weatherbird still appears on the front page today.

Another long-running feature was an illustrated piece called “Our Own Oddities” (originally called “St. Louis Oddities”), which ran from 1940 to 1990 and included quirky facts and anecdotes. The Post-Dispatch was also known for its political cartoons. 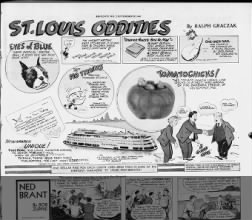 By the 1880s, the Post-Dispatch had become St. Louis’s biggest evening newspaper, and the paper covered all of the city’s major moments, including the completion of the Eads Bridge, the streetcar strike of 1900, the 1904 World’s Fair and Summer Olympics, the 1939 smog problem, the topping out of the Gateway Arch, and much more.

If you have St. Louis area ancestors, you might find them in lists of births, marriage licenses, divorces, deaths, or burial permits or in columns about social activities, travel notes, gossip, club activities, and news from nearby towns—just to name a few. You might even find interesting anecdotes about your relatives, such as this short piece from 1944 entitled, “3 Hams Put in Wrong Auto; Owner Wants Them Back.”

Get started searching or browsing the St. Louis Post-Dispatch here.