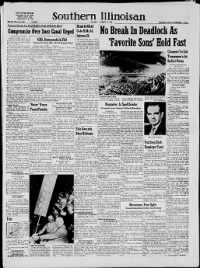 Carbondale, founded in 1852, was a railroad town for much of its history, until the 1940s when the presence of Southern Illinois University came to dominate the city’s economy. Located in a region of Illinois known as “Little Egypt,” Carbondale was called the “Athens of Egypt” because it was considered the intellectual center of the area. With a population of 2,000 in 1880, by 1980 Carbondale had grown to more than 26,000 people.

The Free Press (which alternated between the titles Carbondale Free Press and the Daily Free Press) was the city’s paper until the late 1940s, when it began to be consolidated with the nearby Murphysboro Daily Independent and Herrin Daily Journal under the masthead of the Southern Illinoisan.

The Free Press and, later, the Southern Illinoisan captured events both big and small for the residents of Carbondale and the surrounding towns. For instance, it reported on a major train wreck outside of town in 1909, on Eleanor Roosevelt’s visit to the city in 1939, and on a massive fire at Southern Illinois University in 1969. But the paper also made sure its readers knew about the 105th birthday of a former slave, kept them updated on the “Monster of Gooseville” (which turned out to be a bear), and informed them when the local coin club got a new president. 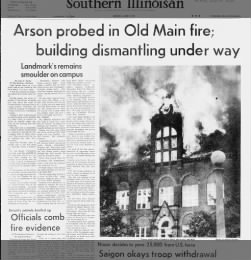 Aside from the typical obituary and engagement sections, if you had ancestors living in southern Illinois, you might find them in the “Hospital Notes,” which kept track of who was admitted to or discharged from the hospital. Or they might be in the “Police Briefs,” which let readers know if their neighbors had a run-in with the law recently. And if you know the birth or funeral date of a Carbondale-area ancestor, you can even look up what the temperature was like that day in the weather forecast that commonly appeared on the front page.

So if you’re interested in southern Illinois and the Carbondale area for genealogical or historical purposes, try taking a look through the Free Press and the Southern Illinoisan on Newspapers.com!

16 thoughts on “The Southern Illinoisan”