Today we take a look at the frustrating and jaw-dropping history of the “Radium Girls.” 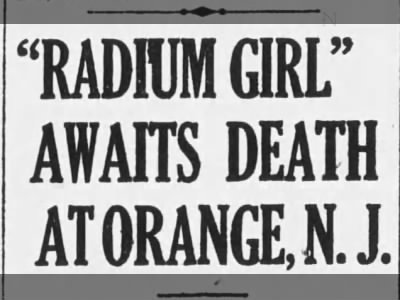 If you’ve never heard of this particular incident before, the “Radium Girls” were factory workers who had the joy of unknowingly contracting radiation poisoning while doing the seemingly innocuous task of painting watch dials. This work was done in three United States factories—one in New Jersey, one in Illinois, and one in Connecticut—who used radium in their paint to make it self-luminous, and all the while the women were led to believe the paint was harmless. 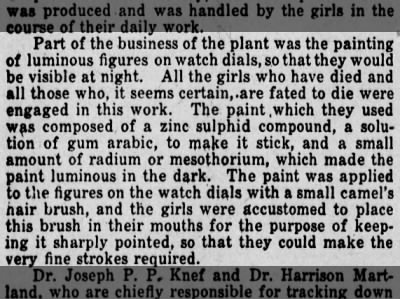 They were paid per dial so time was of the essence, and the quickest way to get those paintbrushes pointed enough to paint such fine lines was by shaping the tip with one’s lips—a method encouraged by the instructors to avoid wasting excess time with other methods such as wet rags or a rinse in water. 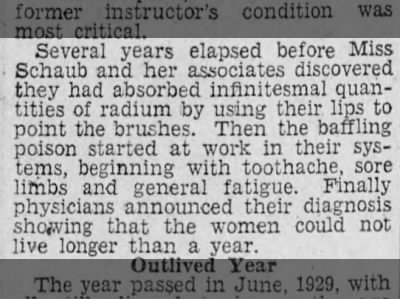 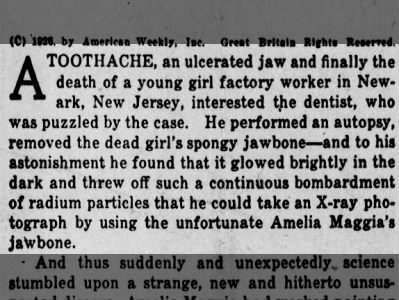 It’s not known exactly how many women were affected by the radiation poisoning that soon spread through their systems, but as the death toll began to rise the connection between the radium paints and the deaths became more and more clear. Meanwhile, factories like the U.S. Radium Corporation maintained that the girls had died from unrelated causes. They insisted that the amount of radium used in the paint was so small as to be harmless, which was true—for the finished watches. Not so for the factory girls exposed to the dangerous substance day after day, stroke after stroke.

In New Jersey, five women who worked at the United States Radium Corporation sued the company for the health problems—and, quite bluntly, the certain death—that they would suffer because of the factory’s negligence. These five were called the “Radium Girls” in the news stories that sprung up over the next several decades. 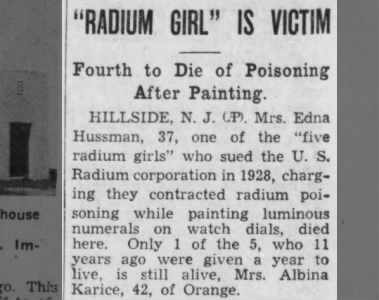 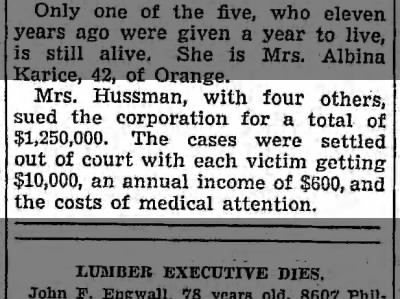 They eventually won, though the money was often used to pay for their funerals. The last of the five women died two years after their case was settled.

Some good did manage to come from the horrific and avoidable fates of these women. Laws regarding compensation for disease or injury from occupational hazards were improved, and the window of time in which an employee could collect such compensation was extended. The nation’s understanding of the dangers of radium increased exponentially, and within a decade new precautions had been put in place to avoid a slow-building disaster like this one from ever happening again—at least, not from radium.

Find more on this oft-untold piece of history with a search on Newspapers.com.

One thought on “The Radium Girls”