The Phantom of the Opera is Here! 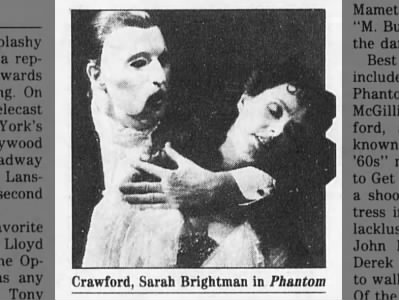 …On Broadway, that is!

This month marks the anniversary of The Phantom of the Opera’s grand debut for American audiences. Previews for the show began January 9th, 1988, shortly followed by the gala opening on January 26th. The musical, which originally debuted in London’s West End two years prior, was found to live up to the hype that preceded its showing at Broadway’s Majestic Theater. 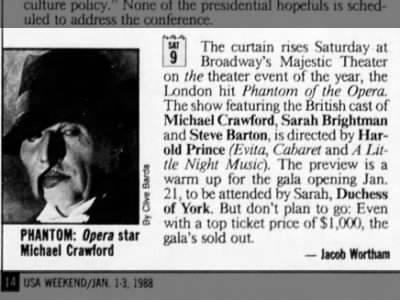 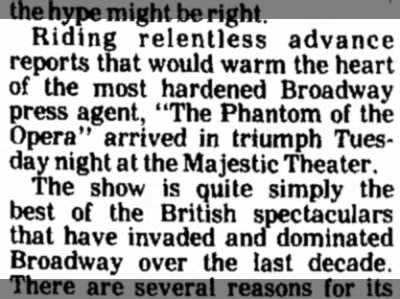 Later that same year, The Phantom of the Opera made away with 7 Tony Awards, losing in only a few categories to Into the Woods, which had hit Broadway in November 1987. 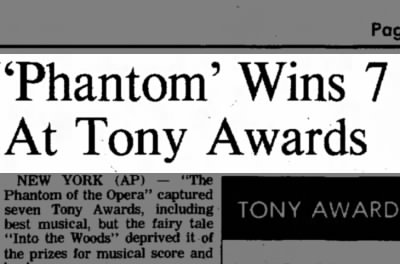 Phantom has since become Broadway’s most successful musical, still showing after more than 25 years. In 2012 it became the first Broadway musical to pass the 10,000th performance mark, and is still the only one to have done so. You can still see the production performed in the Majestic if you’re willing to pay the price—and compared to the cost of those first tickets in ’88 (see the second image above), it’s not too bad!

Find more articles about this famous musical using this search or one of your own on Newspapers.com‘s search page.

One thought on “The Phantom of the Opera is Here!”