The deadliest forest fire in American history swept through Northeast Wisconsin on October 8, 1871. The Peshtigo fire, named after the small town it obliterated, claimed 1200 lives. The Peshtigo fire has been somewhat ignored by history because it started the same day as the great Chicago fire. 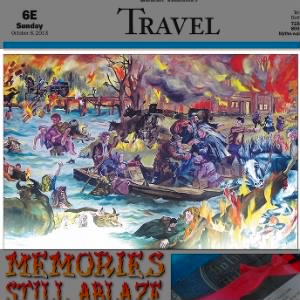 It was an unusually dry summer that year. Small fires used to clear land for farming and railroads had been smoldering, but didn’t cause alarm. That all changed on the evening of October 8th. As parents tucked their children into bed, an ominous rumbling “like the distant roaring of the sea or like a coming storm” had them nervously scanning the horizon. In the distance they could see the glow of a fire. The winds were picking up, but residents still had no idea what was approaching.

About 10 p.m., hurricane force winds, accompanied by lightning, blew into town. Gusts that preceded the firestorm ripped roofs from houses and felled large trees. Alarmed residents ran to investigate and witnessed a huge inferno, described as a tornado of flame, bearing down.

The Guardian, reported that “The wind blew with such tremendous violence that people endeavoring to escape were lifted from their feet and blown into burning houses. The wind blew super-heated clouds of sand on to those running to escape. Each grain burning and blistering.”

Those that could, began a mad dash to the river. Mothers, unable to make it to the water, tried desperately to protect their children from the flames. The fire was an “oxygen-sucking firestorm” whose power has been compared to an atomic bomb. Residents, unable to outrun the fire, burst into flames. Those that did reach the river encountered frightened livestock that trampled over them. Burning logs floated on the river’s surface. Once immersed in the river, faces of those trying to escape were badly burned each time they surfaced for air. Some, unable to make it to the river, jumped in wells to escape the flames. The intense heat caused the water to boil, killing them. Within two hours the town was reduced to ashes.

When relief workers entered Peshtigo after the fire, they found the town and surrounding woods littered with burned bodies. As the magnitude of destruction became apparent, people from surrounding towns stepped up to care for survivors. Those who managed to survive the flames lost everything. Today, Peshtigo is rebuilt and thriving, and as the Green Bay Press-Gazette says, is “Truly reborn from the ashes.”

If you would like to learn more about the Peshtigo fire, or have ancestors from that area, search our archives at Newspapers.com to learn more!

25th Anniversary of the Death of Diana, Princess of Wales