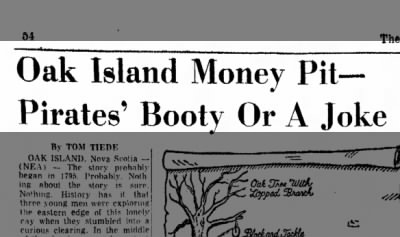 In the late 1700s a teenage boy named Daniel McGinnis explored the inland areas of Oak Island, Nova Scotia, Canada, and found an unusual depression in the ground. Some reports also say he noticed an old block and tackle hanging from a sawed-off tree limb, just above the dip in the earth. The area was known to have been frequented by pirates in earlier years, an idea which had no doubt occurred to the eager young man. McGinnis found this reason enough to being digging with the help of two of his friends. 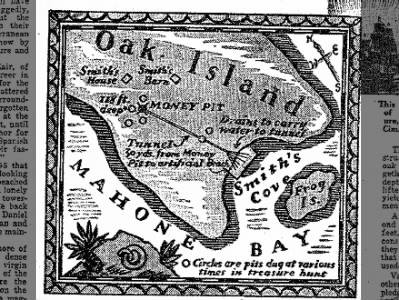 When they had dug through ten feet of soil, they hit a layer of wood that had been purposefully laid across the pit. Surely the treasure they dreamed of was under those timbers! But when they pulled out the wood layer there was nothing below but a two foot tall pocket of air…and more dirt. So they kept digging, disappointed but undeterred. 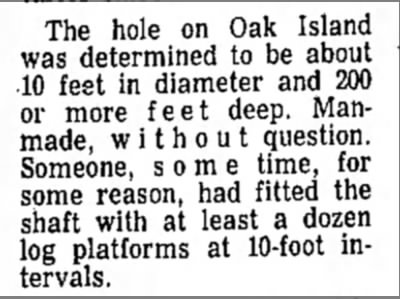 After digging another twenty feet down and finding two more layers of timbers—and no sign of any treasure—the three boys gave up. They would not be the last to try and fail.

With the discovery of the log platforms, it became clear that the pit had been made intentionally by some person—or more likely hundreds of persons—in the past. The promise of wealth hung in the air over Oak Island. Many more came to continue to dig, determined to find the treasure they knew must be buried deep in the earth and to claim the fame of success. 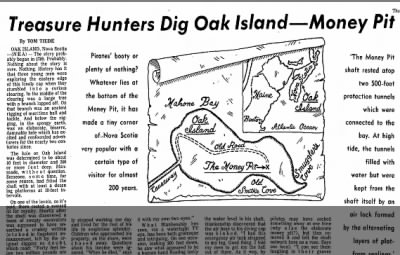 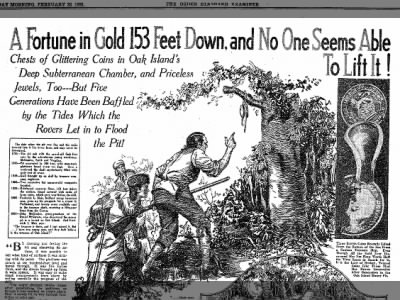 Men and money were thrown into excavating the hole, and more log platforms and water traps impeded their progress. At 90 feet, diggers found something that renewed the effort…a stone with a strange inscription, decoded thanks to James Leitchi, a professor of languages. The wide, flat stone read, “Forty Feet Below Two Million Pounds are Buried.”

Thousands of dollars and even a handful of human lives were sacrificed in the search for the money pit’s treasures. Curious hopefuls tried draining the hole as they worked, digging new shafts parallel to the money pit, building dams, and any other method they could think of to get to the bottom of the pit. But even today, the mystery remains unsolved. The pit continues to attract treasure hunters and tourists alike. 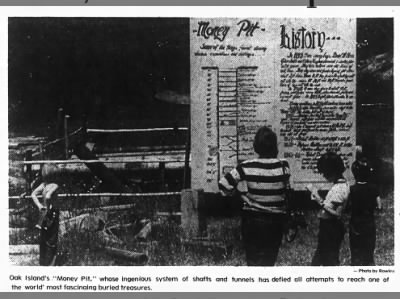 Still, it’s said that some small pieces of treasure have been found here and there over the decades. And there’s that mysterious stone that promised a fortune. Is there really a hidden secret at the bottom of the money pit, or could it be an incredibly elaborate hoax?

To read a fairly comprehensive summary of the Oak Island Money Pit mystery, take a look at the article on this page. More articles about this mystery can be found here.