The Mythical Man of Georgia Tech

If you were a student at Georgia Tech, you’ll already know of George P. Burdell, one of the establishment’s best-known graduates. Enrolled in 1927, Burdell received both a bachelor’s and a master’s degree before becoming an official alumnus of the school. Then he enrolled again. In fact, George P. Burdell kept enrolling over and over again for years, and remains a student there to this day. 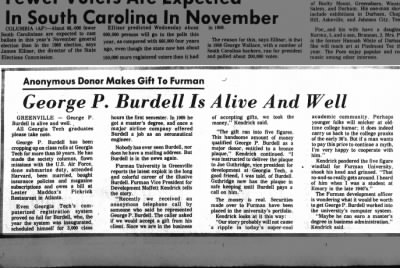 The funny thing is, George P. Burdell doesn’t exist. In 1927, another (real) student named William Edgar “Ed” Smith received two admission forms to Georgia Tech. He filled out both: one with his actual information, and one using the false identity of George P. Burdell.

Once Smith and Burdell were both accepted, Smith kept the joke running. He did all of Burdell’s schoolwork along with his own, changing it up here and there to ward off suspicion. By 1930 Burdell had been given a bachelor’s degree, and just a few years later a master’s followed. Every year since he’s remained an active student. When the school implemented a computerized enrollment system they thought Burdell would fade into oblivion, but students hacked the system and enrolled Burdell in every single class offered.

Burdell didn’t just stick around Georgia Tech, either. His name appears at other institutions; in wedding announcements; in attributions for magazines, T.V. shows, and productions; even in WWII records. And as you can see in the article above, George P. Burdell was alive and well in 1972, when he donated several thousand dollars to Furman University, earning him a bronze plaque.

“…If a man wants to pay this price to continue a myth, I’m happy to cooperate with him,” Furman’s vice president of development mentions in the article.

Check out Newspapers.com for more interesting history captured in articles like these.