The Mysterious Demise of Ludwig II

If there’s one thing people generally agree on, it’s that mysteries hold a strange sort of magnetic power over our minds. They make us pause, they make us wonder. They add an element of the unsolvable to a world that often seems all too ordinary. And when a mystery also coincides with a death, that interest is doubled.

Add that with royalty, and you’ve got a front page news story. 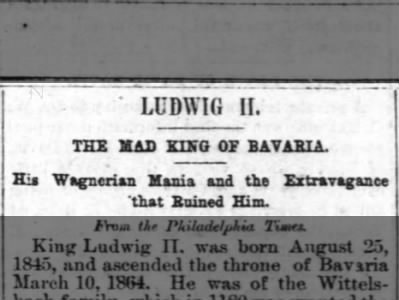 Ludwig Otto Friedrich Wilhelm, also known as Ludwig II, was the king of Bavaria in the mid to late 1800s. He enjoyed arts and architecture and was responsible for the creation of the now-famous Neuschwanstein Castle, among several others. And in 1886 he was found dead in the shallows of Lake Starnburg, along with his psychiatrist, Dr. von Gudden.

Ludwig’s reign was fraught with difficulties, particularly in the years preceding his death. He had a tendency to overspend on his opulent castle projects, borrowing excessive amounts of money against the advice of his harried cabinet until they finally decided the king must be deposed before he dismissed them all. They conspired together with four psychiatrists—one of whom was Dr. von Gudden—to declare Ludwig clinically insane. They bribed the servants for details on Ludwig’s eccentricities, of which there were admittedly quite a few, and used these and their own reports of Ludwig’s uncontrollable spending habits to solidify their assertion. Conveniently, Ludwig’s younger brother Otto was also considered insane, which allowed the claim of hereditary insanity to hold more weight. 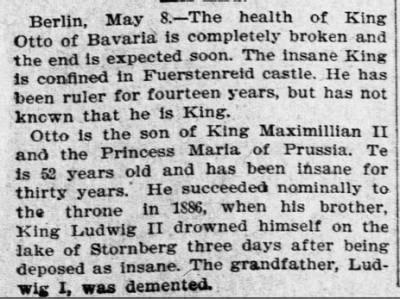 Ludwig II was declared insane and deposed on June 12, 1886. The next day he was found dead in waist-deep water. Near him was the psychiatrist, with head trauma and marks of strangulation around his neck. Most concluded that the “mad king” had killed the conspiring von Gudden and then drowned himself: 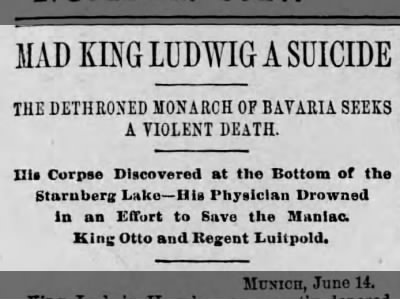 But this is where the mysterious part comes into play. During the autopsy it was found that Ludwig had no water in his lungs—he had not been killed by drowning. He reportedly had no other marks on his body, and he had not seemed suicidal in the time before his death. There was also no evidence to prove that Ludwig killed the psychiatrist, although that seemed to be the only explanation. Since then, there have been revelations that perhaps Ludwig had been attempting an escape from his confinement in Berg Castle and was shot by his enemies, a story supposedly supported by a bullet hole-ridden coat that was said to have been worn by Ludwig that day. But as the autopsy said there were no wounds on Ludwig’s body, this can’t be proven. Another unproven theory suggest that heart attack or stroke may have killed Ludwig, a result of the lake’s cool temperatures during his escape attempt.

Though at the time it was generally accepted that he was truly insane and had killed himself for this reason, the accusation of insanity has since been refuted and it is no longer considered certain that his death was by suicide. And so the cause of Ludwig’s death remains unsolved even today. 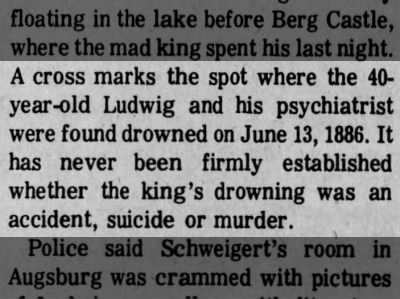 Read more on Ludwig II with the articles found in this search. Try Newspapers.com today to find more articles about historical events, family history, or other topics of your choice.