The Mysterious Case of Bobby Dunbar

In the late summer days of 1912, the Dunbar family’s 4-year-old son Bobby disappeared during a trip to Swayze Lake in Louisianna. After eight months of searching, the boy was found in the company of handyman William Walters. Walters was accused of kidnapping the Dunbar boy despite his insistence that the boy was Bruce Anderson, the illegitimate son of Walters’ brother and a woman named Julia Anderson who worked for his family.

The Dunbars were wealthy and reasonably convinced the boy was Bobby thanks to a scar on his foot and a familiar-looking mole. Anderson was unwed, not wealthy, a field hand, and fairly certain that the boy was her son Bruce. When the two families came head to head in a trial for who the boy really belonged to, the Dunbars won easily. Bobby was sent home with his true family, while Walters was sent to jail for kidnapping him. 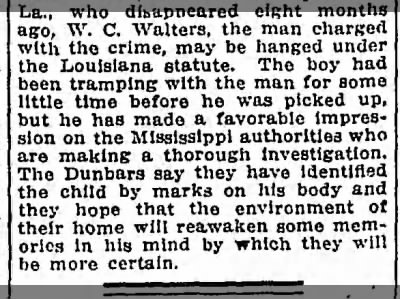 Walters maintained his innocence throughout his time in jail. This article is a section of one of the letters he wrote during his incarceration: 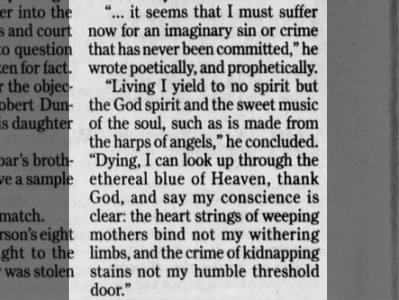 He was released after two years in prison and so escaped being hanged, but he never backed down on his story. Bobby Dunbar lived the rest of his life with his family, and Walters lived the rest of his life convinced that the boy was Bruce Anderson. Julia Anderson eventually got married and had seven more children, who have said that she spoke often of the son the Dunbars took from her.

Perhaps you have guessed by now that this story doesn’t wrap up so neatly. Decades later, Bobby Dunbar’s granddaughter, Margaret Dunbar Cutright, looked further into the story after noticing how deeply conflicted newspaper reports had been at the time. Some said the boy had instantly recognized his “mother,” Lessie Dunbar, and that the two had reunited in a flurry of hugs and tears, but others maintained that neither had shown immediate signs of recognition upon first sight. 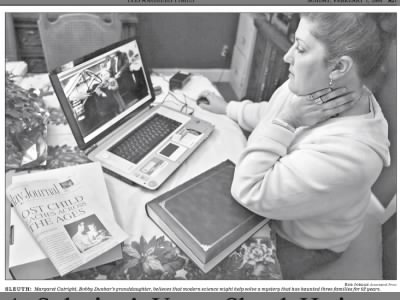 A comparison of DNA between Bobby’s son and the son of Bobby’s brother, Alonzo (unquestionably a Dunbar), led to the shocking discovery that the boy who had lived as Bobby his entire life had not been a Dunbar at all. At long last, William Walters was proven to be as innocent as he’d claimed. 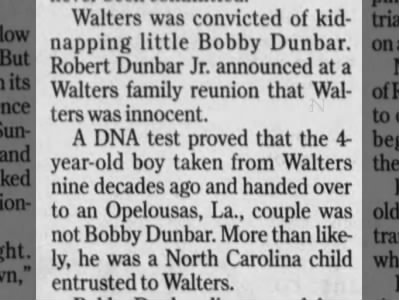 Unfortunately, this conclusion still leaves the fate of the true Bobby Dunbar unknown. It is thought that he most likely fell into the lake and died back in 1912, the summer he disappeared.

There is so much to be found on this unusual story in the pages of newspapers old and new. Try a search for more information on Bobby’s story or seek out some of your own family history on Newspapers.com.