If there’s one thing a young countess in mid-1800s England seems unlikely to throw herself into, it’s probably math. Or perhaps computers. Or how about…computer programming? So you might be surprised by the person credited with creating the first algorithm intended to be performed by a machine: Augusta Ada King, Countess of Lovelace—or as she is more commonly known, Ada Lovelace.

Ada was far more interested in mathematics and science than in arts and poetry. This is likely due to her upbringing, as her father, the famous poet Lord Byron, left her mother shortly after Ada’s birth. As a result, Ada’s education and interests brought her into the company of many scientists and mathematicians, who found her to be very intelligent. 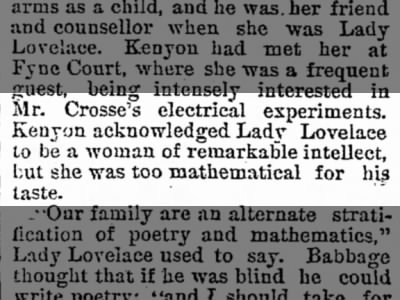 She worked with mathematician Charles Babbage and once translated an article on Babbage’s analytical engine, just for kicks. Babbage encouraged her to add her own notes on the engine, and in these notes Ada included an algorithm to be used by the engine in computing—the first computer program. 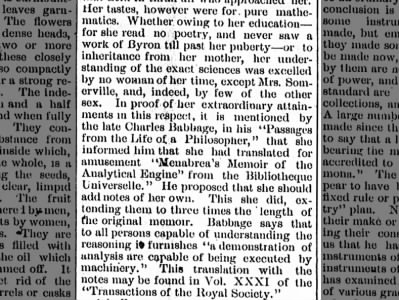 In November of 1852 Ada Lovelace died, like her father, at a very young age—only a few weeks away from her 37th birthday. 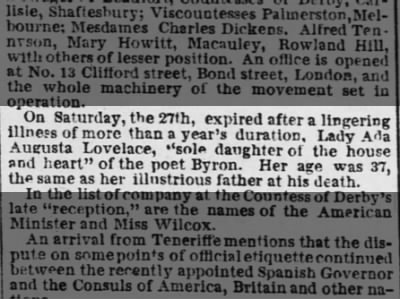 Find more on Ada Lovelace and other notable people on Newspapers.com using the search or browse pages.