On the afternoon of May 31, 1889, heavy rains caused the dam on Lake Conemaugh to fail, sending the water from the lake rushing downstream to devastate the city of Johnstown, Pennsylvania. With a death toll upwards of two thousand, the Johnstown flood was the deadliest natural disaster in American history up to that point. 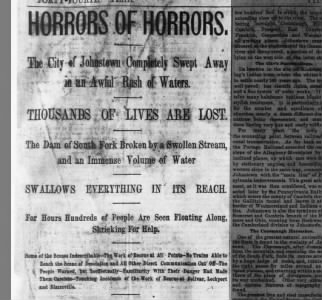 Lake Conemaugh was a manmade reservoir created in 1853. In 1879, the lake and the surrounding land were sold to the South Fork Fishing and Hunting Club to create a getaway in the Pennsylvania mountains for Pittsburg’s elite, including Andrew Carnegie, Henry Clay Frick, and Andrew Mellon. Although warned in 1881 by an engineer that the lake’s dam desperately needed maintenance—improper repairs, among other problems, had weakened the dam—the club ignored the recommendations.

Fourteen miles downstream from Lake Conemaugh was Johnstown, a booming steel mill city. An unusually heavy rainstorm that began on May 30, 1889, caused nearby rivers to overflow their banks, and the streets of Johnstown filled with water; the storm also caused the waters of Lake Conemaugh to rise rapidly. Despite frantic last-ditch efforts to prevent the dam from failing, the dam collapsed around 3 p.m. on the 31st.

The water of Lake Conemaugh was sent hurtling into the valley below, wreaking havoc on the smaller towns in its path and wiping out houses, trees, railcars, animals, and people. By the time the water reached Johnstown about an hour later, it was still dozens of feet deep and moving at about 40 miles per hour.

As the water cut its destructive path through Johnstown, the massive amount of debris carried by the flood accumulated against a stone railroad bridge that stood on the edge of the city. Somehow, the mountain of debris caught fire that evening, and the resulting conflagration killed many people who had been trapped in the debris.

The water from the dam took only about 10 minutes to sweep through the city, but it left incredible damage in its wake. More than two thousand people were killed, including ninety-nine entire families, and 1,600 homes were destroyed.

When news of the disaster reached the outside world, money and supplies came pouring in to help the people of Johnstown and the surrounding communities rebuild their homes, businesses, and lives. Clara Barton and her newly created American Red Cross provided relief for five months. Although lawsuits were filed against the South Fork Fishing and Hunting Club, none of them were successful, and the club was not held legally accountable for the disaster.

Learn more about the Johnstown Flood of 1889 on Newspapers.com.