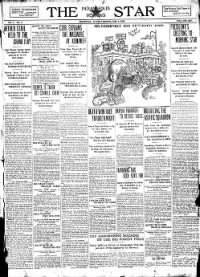 If you have ancestors from Indiana or the surrounding region, come check out the Indianapolis Star on Newspapers.com. Issues from 1903 to 1922 are available with a Newspapers.com Basic subscription—or,with a Publisher Extra subscription, access the years previously listed and additional issues from 1923 to March 2016.

The Indianapolis Star began publication in June 1903, when Indianapolis was already a bustling city. It is a daily morning paper that originally launched with 10-page issues, except for Sunday issues, which were longer.

Indianapolis had been founded on the banks of the White River in hopes that the waterway would serve as a major artery for trade, but the river turned out to be too sandy and shallow. Nevertheless, the city became a major transportation hub for the region because of the railroads and roads that passed through it. In fact, just a few months after the Indianapolis Star began publishing, it reported on a train wreck that occurred in Indianapolis in which 14 players on the Purdue University football team were killed.

In 1913, the city’s position on the White River proved a detriment when heavy rains caused massive flooding. The Indianapolis Star covered this and other natural disasters that struck the city over the years, including the outbreak of tornadoes in 2002.

Of course, the Indianapolis Star also covered politics, and a major story in the late 1960s and early 1970s was the controversial formation of Unigov—the consolidation of Indianapolis’s city and county governments.

If you have Indiana ancestors, the Indianapolis Star is a great place to look for them, as it includes plenty of columns and articles about the city’s—and region’s—inhabitants. You can find announcements of births, marriages, and deaths in addition to social and personal news. And you can learn about who held parties and meetings, as well as who played on the winning basketball team, got into a car accident, and more.

The paper is also great for discovering the context of your ancestors’ lives. For instance, from the ads, you can find out how much your family members might have paid for a TV or house during a certain era, as well as what clothing was in style at the time.

Get started searching or browsing the Indianapolis Star here—you never know who you might find!