Newspapers.com now has issues of the Guardian, one of the United Kingdom’s leading national papers! With issues dating back to 1821, you can explore nearly 200 years of British news and history. 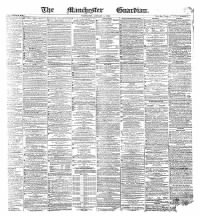 The Guardian was founded in 1821 in the industrial city of Manchester, where the paper would remain (as the Manchester Guardian) until the 1960s, when it moved to London. The paper first began with weekly issues (and later twice weekly issues), since a tax on newspapers made it too costly to publish more frequently. But after about 30 years, after the government dropped the tax, the Guardian began publishing daily in 1855.

Originally founded as left-leaning paper, the paper temporarily shifted right in its early years, before returning to the left, where it remains today (in the center-left). Though it was long an important regional paper, the Guardian first gained its reputation nationally and internationally during the 57-year tenure of editor C.P. Scott, which began in 1872.

The Guardian remains internationally respected today and is particularly known for its investigative journalism. The Guardian has been owned by a trust (now a limited company) since 1936, which allows the paper to maintain its financial and editorial independence. After the paper’s move to London in 1964, it faced greater competition and financial challenges, but a series of innovations and redesigns in the 1970s and ’80s (and in the decades since) allowed the Guardian to maintain its status as a leading national paper of the UK.

Since the Guardian was long based in Manchester, the paper can be a good resource for finding ancestors from that area, particularly if they were involved in any news-worthy events. Even if you don’t find mentions of your relatives, the Guardian is rich in information about what was going on in Manchester (and later, London) and the rest of the nation, enabling you to learn about local and national events that may have affected your family members.