The Greatest Lawman in the Old West

U.S. Deputy Marshal Bass Reeves is the subject of today’s blog post, and a worthy subject he is. He was one of the first black deputy marshals west of the Mississippi, and thus had the authority to arrest any and all who deserved it, regardless of race or gender. Tough, fearless, and practically invincible during his 32-year career, he was the absolute best at what he did. 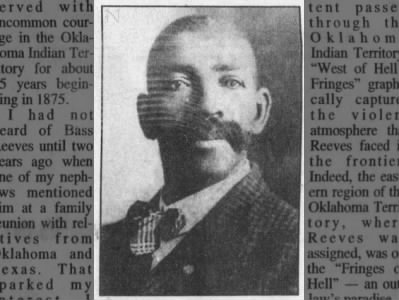 Reeves was a clever and honorable man who was unfailing in his devotion to his duty. Once a warrant found its way into his hands, he was tireless in his efforts to see the criminal brought to justice. And Bass Reeves always got his man. Stealth and disguise were his companions in many of his arrests: 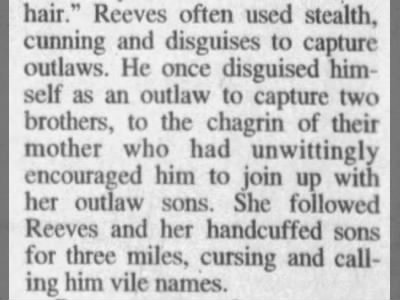 He claimed to have brought some 3,000 felons to justice during his work in Arkansas and the Oklahoma territory. Though he was responsible for the deaths of fourteen men, he was said to have only ever killed in defense of his own life (despite finding himself in many dangerous situations): 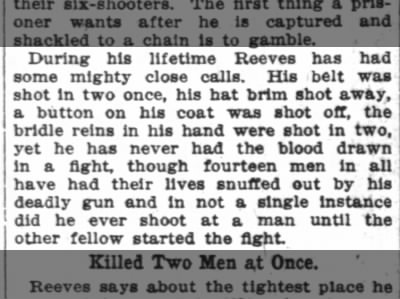 One instance that perhaps best demonstrates Reeves’ convictions was the arrest of his own son, Bennie Reeves, for murder: 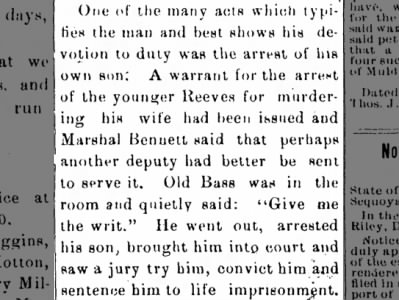 Illness led to Reeves’ retirement in 1907. He died three years later from nephritis at the impressive age of 72, having never been wounded in the line of duty. 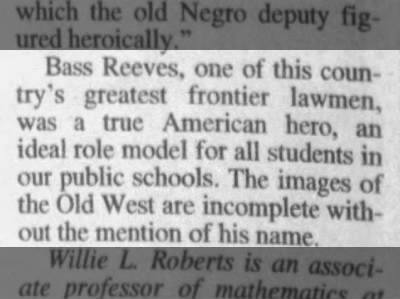 Find more on this fascinating character of Old West history with a search on Newspapers.com. He was also a primary character in the most recent episode of Timeless, “The Murder of Jesse James”. Though the show claims the Lone Ranger was based off of Reeves, there is no evidence to solidify this link. Still, it can confidently be said that Bass Reeves was about as close to a real-life Lone Ranger as a person can get.

2 thoughts on “The Greatest Lawman in the Old West”