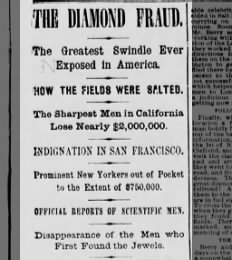 On November 25, 1872, one of the greatest hoaxes of the day was revealed when it was discovered that some of the biggest names in business had been conned into investing in a fake diamond field by two Kentucky swindlers.

Following the gold rush of 1849 and silver rush of the Comstock Lode in 1859, it seemed like the American West held endless possibilities for wealth. So when two Kentucky prospectors showed up at a bank in San Francisco in 1871 with a bag full of uncut diamonds, news of the gems quickly leaked to the founder of the bank, William C. Ralston. The two prospectors, Philip Arnold and John Slack, were tracked down, and eventually they were persuaded to divulge that they had found a major diamond field, loaded with a variety of gems in such abundance that they could practically be plucked off the ground. Ralston alerted some of his business associates, and after the two prospectors reported they had returned to the diamond field and found even more stones, Ralston and his associates decided to try to buy the two men out.

But what Ralston didn’t know was that Arnold and Slack were con men. The bags of diamonds they presented were actually ones of inferior quality that they had acquired, and as soon as they got money from Ralston, they used that money to secretly travel to London and buy more inferior uncut diamonds (along with some rubies, emeralds, and sapphires for good measure). 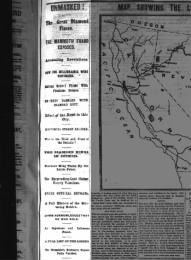 Under the pretense of going to their “diamond field” along the Colorado-Wyoming border (though some newspapers would report it as being in Arizona) to find more gems for the businessmen, Arnold and Slack actually went there to salt their diamond field. When Arnold and Slack returned with the gems they had “found,” the businessmen took a sample to famous diamond expert Charles Lewis Tiffany in New York for authentication. However, neither Tiffany nor his lapidary had experience with uncut stones, so they mistakenly valued the gems at far more than they were actually worth. 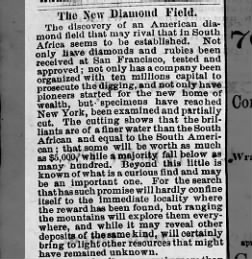 The hoax was finally discovered when Janin happened to meet government geologist Clarence King on a train. King decided to take a look at the diamond field himself, and not long after he arrived he and his team began noticing suspicious things about the site, like diamonds and other gems being found in places and groupings where they wouldn’t naturally occur.

King immediately informed Ralston and the other investors about the fraud, and news of the swindle broke in San Francisco newspapers on November 25, 1872, revealing that many high-profile figures from both coasts had been duped. When Arnold was eventually tracked down back home in Kentucky, he settled out of court and ended up only having to pay back a fraction of the money he had earned from the con. Slack was never found.

Want to learn more about the Great Diamond Hoax of 1872? Start a search on Newspapers.com!