During the night of March 11–12, 1888, heavy rain falling across the northeastern United States turned into snow, heralding the start of a blizzard that would kill hundreds of people and cut off major hubs like New York City from the rest of the country for days.4. 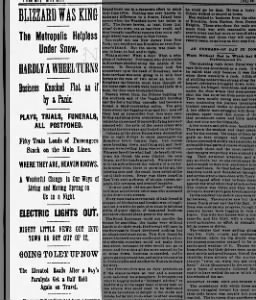 The weather had been warm and mild leading up to the blizzard, but a cold, snowy storm moving in from the Great Lakes region collided with a warm, wet storm moving up from the south, creating a blizzard that not only dumped 20–60 inches of snow but was also accompanied by hurricane-force winds and below-freezing temperatures.

The blizzard was at its worst on the 12th and 13th. The wind blew so hard that snow accumulated in drifts sometimes dozens of feet high. Trains were unable to run for days, telegraph lines were knocked down across the northeast, and hundreds of boats along the coast were sunk or beached. Due to the cold temperatures and whiteout conditions, people froze to death in the streets and livestock died in the fields.

On the 13th, while New York City was still in the grips of the blizzard, the New York Tribune described the previous day of the storm:

“The forcible if not elegant vocabulary of pugilism supplied the phrases which will, perhaps, best reveal to the popular imagination the effect of the storm that visited New York yesterday. New York was simply ‘knocked out,’ ‘paralyzed,’ and reduced to a condition of suspended animation. Traffic was practically stopped, and business abandoned. […] Chaos reigned, and the proud, boastful metropolis was reduced to the condition of a primitive settlement.”

The storm had mostly dissipated by the 14th, but the cleanup was only beginning. Mountains of snow had to be cleared from the roads and train tracks, communications lines had to be repaired, and debris blown around during the storm had to be removed. To make matters worse, when the weather warmed back up, flooding from the snowmelt occurred in some places.

The consequences of the storm made a big impression on local officials, and as a result, major cities like New York began moving their trains and communication lines underground.

Do you have any family stories about the Great Blizzard of 1888? Share them with us! Or find more articles about the storm on Newspapers.com.