East Meets West
At the time, the arms and space race between the U.S. and Soviet Union was in full swing, and Cold War tensions were high. But the two nations agreed in late 1958 to hold cultural exhibitions in each other’s countries. Before the American exhibition officially opened in Moscow in July 1959, Vice President Nixon traveled to Russia to act as host to Khrushchev as the Soviet premier toured the exhibits. 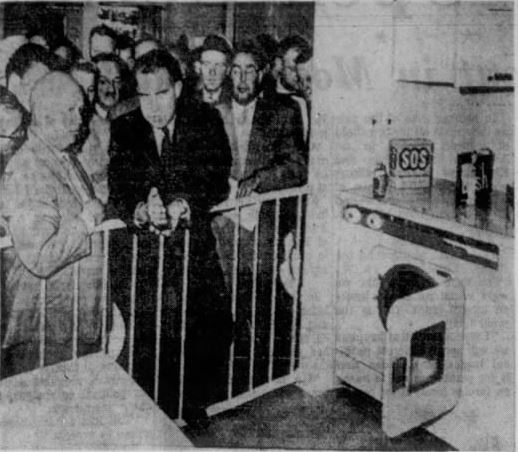 The two men’s informal discussions that day are collectively known as the Kitchen Debate, since (as the Daily News put it) “their battleground was the narrow space between the stove and the washing machine in a model American kitchen.” Though their conversations touched on topics like modern appliances, the affordability of housing, and the exchange of ideas between the two nations, the real subject was capitalism versus communism—and their discussions sometimes grew quite heated.

The Kitchen Debate
When Nixon bragged that the model house they were looking at cost $14,000—a price tag he claimed was affordable for most American World War II veterans—Khrushchev replied that American houses were built to only last 20 years, while Soviet houses were built to last for generations. When Khrushchev boasted that everyone was guaranteed housing in Russia, Nixon shot back that America had diversity and choice.

Following their exchange in the model kitchen, Nixon and Khrushchev moved to a TV studio demonstrating new color television technology. There, Nixon suggested that advancing technology would increase the possibility of communication between the nations, facilitating learning on both sides. “Because after all,” he could not resist adding, “you don’t know everything.” To which Khrushchev replied, “If I don’t know everything, then you know absolutely nothing about Communism, except for fear!”1

The American Public’s Reaction
When news of the exchange hit U.S. newspapers, the American public—for the most part—applauded Nixon for standing up to the famously bellicose Khrushchev. An AP article carried by the Lincoln Journal Star reported that “Nixon stood toe-to-toe with Khrushchev batting back his arguments one by one.” The Belleville Telescope admiringly wrote that the meeting between Nixon and Khrushchev “developed into a world-shaking bluff and bluster in which the Russian Premier came out second best.” 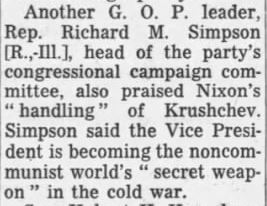 And when, a few days later, the video of the conversation was aired on American TV, Nixon gained further popularity. An editorial in the Evening Sun, written in the weeks after the Kitchen Debate, lavished praise on Nixon, saying “In every assignment he has drawn, he has turned in a distinguished performance. He is the despair of opponents who wait for him to stumble so they can push him out of sight.” (Of course, Nixon would later stumble—quite spectacularly.)

Questions for Today
But while the gloves may have come off during the Kitchen Debate, it did little to actually resolve any of the problems of the Cold War. The showmanship between the two leaders resulted in little besides popularity and propaganda within their respective countries.

However, the Kitchen Debate does spark some questions about the potential meeting between President Trump and Kim Jong Un. If Trump is seen as standing up to Kim Jong Un, will he get a similar boost in domestic popularity as Nixon did? And will the meeting between Trump and Kim have any lasting effect on relations between the two countries? Or, like the Kitchen Debate, will it be a temporary blip on newspaper front pages?