The Ghost of Patience Worth 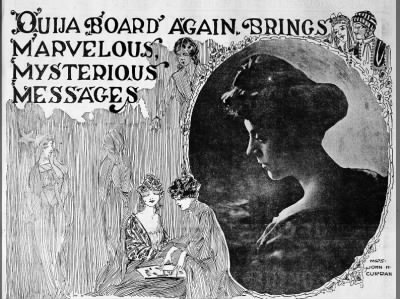 In honor of the Halloween holiday, today’s post focuses on the intriguing story of Patience Worth—the spookiest author you’ve probably never heard of. Patience had a very unusual way of writing, a method that, both then and now, produces either a sense of unease or a lot of eye rolling. Luckily for Patience she found a willing partner in a Mrs. Pearl Lenore Curran, and thousands of pages of fiction and poetry resulted from their peculiar partnership.

It all began when Pearl Curran visited her friend who convinced her to try the Ouija board. As the article above states, their first attempts were apparently met with this reply: “Many moons ago I lived. Again I come—Patience Worth my name.” 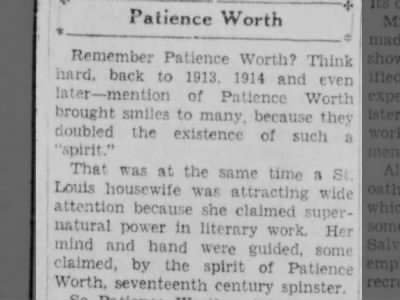 Patience Worth was a woman thought to have lived several hundred years before Curran’s time based on Curran’s descriptions and Patience’s odd pattern of speech, which even Curran said was “as strange to her as it is to others.” Curran used the Ouija board to learn what Patience wanted to write, describing the sessions as visions of scenes and action rather than a voice telling her which words to use. Eventually Curran became so familiar with Patience’s ways that she could receive direction with nothing more than the typewriter at which she wrote. Under Patience’s name, Curran published seven books, dozens of plays and essays, and thousands of poems.

Patience’s unique phrasing certainly made the idea of a dictating ghost more believable. She also appeared to be much more educated on history and culture than Curran claimed to be, which was something of a wonder to even the most skeptical. Still, many didn’t quite buy the story. 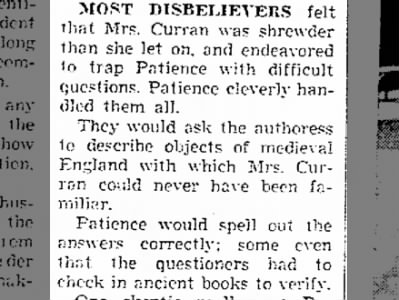 Pearl Curran insisted throughout her life that the ghost of Patience truly communicated with her. Unfortunately, no record was ever found of a living Patience Worth in years past, and the mystery of (and interest in) whether she ever really existed died with Curran. Regardless of whether Curran spoke the truth, had a secondary personality, or was simply a very clever woman, the writing she did under the name of Patience Worth was considered learned, witty, and of high quality. 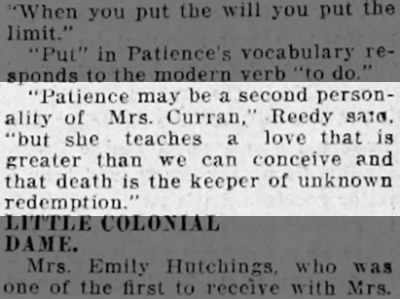 Find out more about Patience Worth and Pearl Lenore Curran using this search on Newspapers.com, or try to find some spooky stories of your own! The Search Page and Browse Page are great places to start exploring history through the news.

One thought on “The Ghost of Patience Worth”