The Fraught and Fantastic History of the Flying Car 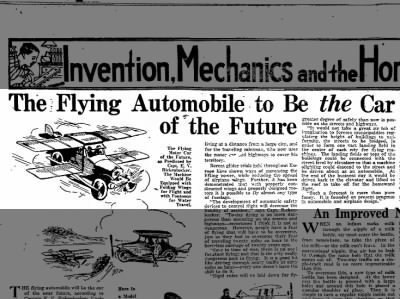 Flying automobiles have soared through our imaginations almost as long as planes and cars have been around. Televised manifestations of this particular futuristic dream have shown up in our shows and movies: George Jetson zooming about in his weightless, bubble-topped space-mobile; Caractacus Potts flying across the ocean, his racing car fitted with functional folding wings; and Doc Brown taking off into the air, using Marty McFly’s street as an impromptu runway as he delivers his iconic line: “Roads? Where we’re going, we don’t need roads.”

While flying cars have yet to become the norm for every day travel, it is not for lack of trying. At least as early as 1906, hopeful engineers were working their hardest to make the dream of flying cars a reality by combining the technologies of both airplane and automobile. Most attempts failed, sometimes quite miserably, but a few remain remarkable milestones in the history of the flying car and can be found dotted throughout the newspapers of the last century. 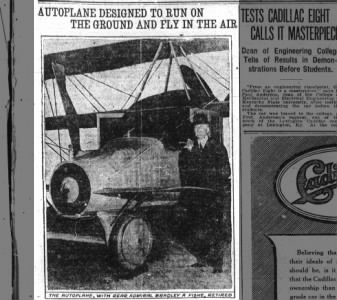 The Curtiss Autoplane was the result of dedicated work on the part of Glenn Curtiss and is widely thought of as the first real attempt at building a flying car. Invented in 1917, this “veritable drawing room on wings” was never truly flyable, though it could lift off the ground for a short jump or two. The wings detached, making the “car” half of this flying car roadworthy. Alas, any further improvements were abandoned after the U.S. became involved in WWI in April 1917. 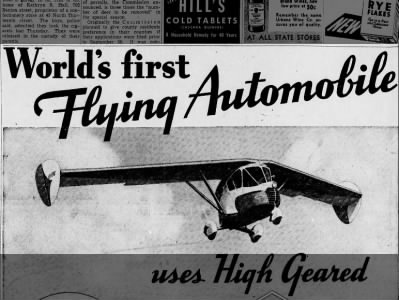 The 1937 Arrowbile was more successful in that it did exactly what it was built to do. In appearance it was essentially just a stumpy airplane with removable wings, but the controls and interior were also different, more closely mimicking that of a car. The brains behind the project, Waldo Waterman, used Studebaker engines in this road-faring model, which led to Studebaker ordering five of the Arrowbiles themselves. Lack of market response led to the order being canceled after only one Arrowbile was made. A few more models were produced after that, but ultimately the project did not generate enough interest and was scrapped from lack of funding. 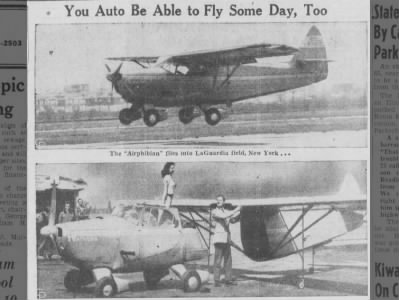 Up next in the list of notable flying car creations comes the creatively named Airphibian. A 1946 creation of Robert Fulton, this model deviated from previous efforts in that it attempted to modify a plane for the road rather than putting wings on a car. One could simply detach the wings and entire back half of the plane, store it in the nearest airport, and take off down the road in the boat-like “car” that remained. Alas, the Airphibian went the way of its predecessors when Fulton, in financial straits, sold to a company that never developed the idea. 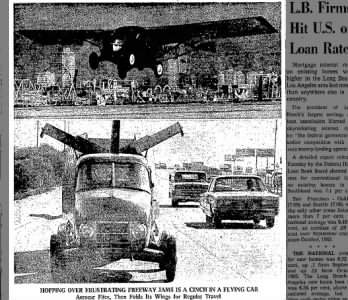 Perhaps the most notable endeavor in the flying car arena is the Aerocar, the most successful and well-known of the original attempts. It was first developed in the ’40s, with models being built and tested as late as 1960. The car was designed to be able to drive, take off, and then return to driving on the roads again without the long interruption of detaching and storing wings. Instead, the wings could be folded away and the propeller removed by one person in five minutes. Ling-Temco was so excited at the prospect that they made a deal for mass production of these cars, but the order was canceled when only half the promised number of buyers could be found. Despite acquiring FAA approval, no financial backers were forthcoming for this particular endeavor, and nothing ever came of the Aerocar.

A common theme among all of these innovative attempts (and more) was that the future dream that is the flying car was not so far away. Of course, this hope continues today. Efforts to create the first commercialized flying car are ongoing, shouldered by ever new and improved models like the Skycar, the result of 50 years of hard work by Paul Moller. Still more progress is being made by other recent companies, with the same expectations. Confidence that flying cars will soon be available—for real this time—is growing with each passing year. But will traffic jams and bumpy roads really be a thing of the past in just a few short years? Only time will tell.

Find more stories about inventions and dreams of the future on the pages of Newspapers.com.