The Dreams That Uncovered a Murder

In May 1827, Maria Marten left home to elope to Ipswich with a man named William Corder. As you may have guessed from the title of this post, the elopement was not quite the scene of love and companionship that Maria expected. Her sorry fate was so famous it has since earned its own name: The Red Barn Murder. Perhaps oddest of all was that the whole thing was uncovered because of a dream.

Maria and William’s decision to marry seems to have come of necessity. They had an illegitimate child together, and though the child died William still seemed committed to the marriage. Their town of Polstead, England, had a building landmark known as the Red Barn where William and Maria planned to meet for their elopement. At William’s suggestion she left her house dressed in men’s clothes to evade prosecution for her illegitimate child, and was last seen on the way to the Red Barn to meet her love.

Dreams of the Barn

Her family didn’t see or hear from her for months. William offered a slew of excuses when asked about her lack of letters or visits home. Over the nearly year-long absence of Maria, concerns became suspicions, and suspicions became dreams: 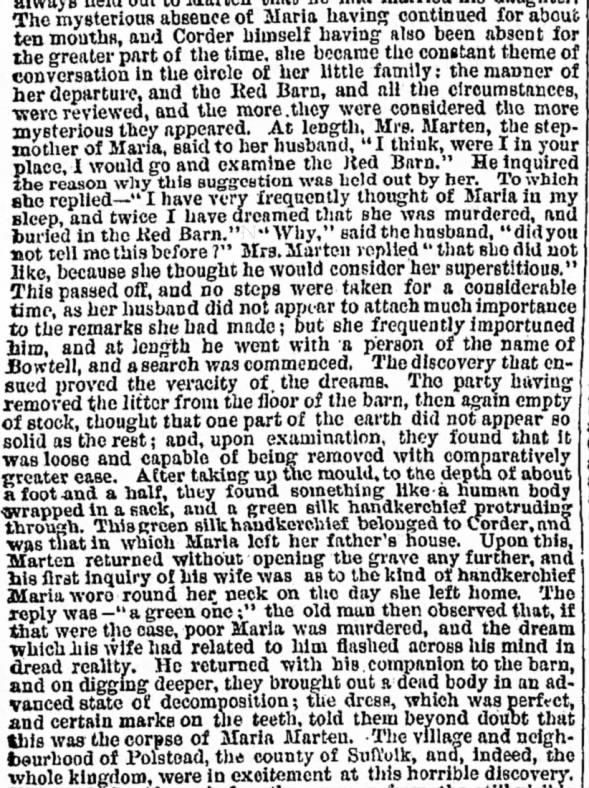 Against all odds, the dreams were not just the nighttime illusions of a worried mind. They’d led straight to Maria’s body and had brought a murder to light.

All signs pointed to William as the primary suspect, of course. He’d met her at the Red Barn, and there she’d stayed. 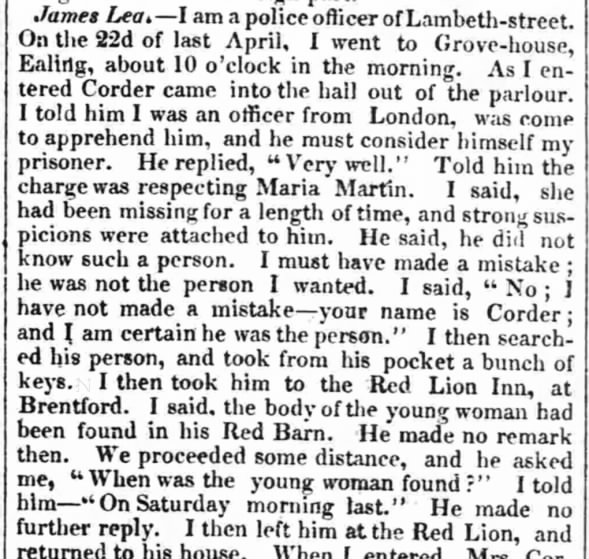 Despite his insistence that he was not the murderer, and that Maria had in fact died by her own hand, he was found guilty and sentenced to be hanged. Many papers printed the detailed description of his execution and the confession of guilt that came with it. As a gruesome footnote to the whole terrible situation, William’s body was afterward cut open and put on public display before being transferred to a hospital for dissection.

As strange as it may seem, the dreams of Maria’s step-mother brought justice to her murderer, and resolution to her loved ones. Were they the result of logical conclusions coming together in the woman’s sleep? Or were they proof of something a bit more mystical?

Find more on the Red Barn Murder with a search on Newspapers.com.

One thought on “The Dreams That Uncovered a Murder”