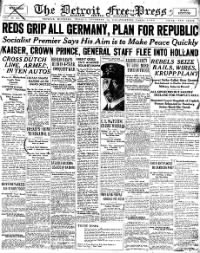 Do you have ancestors from Detroit or surrounding areas of Michigan? Check out the Detroit Free Press on Newspapers.com. Issues from 1837 through 1922 are available with a Newspapers.com Basic subscription—or, with a Publisher Extra subscription, access the years previously listed and additional issues from 1923 to February 2016.

The paper began publication in 1831 as the weekly Democratic Free Press but became the Detroit Free Press in 1837 when it transitioned to a daily paper, one of the first dailies in the state. Then, in 1853, it launched a regular Sunday edition. For the first 40 years or so, the paper was four pages, but it began expanding in 1878. During the Civil War, the paper was known for its war reporting and sent correspondents into the field to cover battles. The Detroit Free Press would later go on to win multiple Pulitzer Prizes, earning the first in 1932.

As a paper of a major Michigan city, the Detroit Free Press covered local, state, national, and eventually world news. It documented the city’s triumphs—like the Detroit Tigers’ first World Series win in 1935—as well as its struggles (such as the race riots of 1943 and 1967) and controversies (such as the Milliken v. Bradley Supreme Court decision in 1974).

Detroit’s economy revolved around the auto industry throughout the 20th century, almost from the moment Henry Ford founded his Ford Motor Company in 1903 and then built the Highland Park Ford Plant in Detroit. Other automakers followed Ford, and the industry boomed in Detroit in the first half of the century. During World War II, the government used the area’s automobile factories for war materiel production, and the Detroit Free Press ran stories about Ford’s factory and others being used to build B-24 bombers, jeeps, and tanks.

In addition to the bigger stories, the Detroit Free Press also covered the milestones and other, more minor happenings in the lives of its residents, letting its readers know who died, applied for a marriage license, had an anniversary, stayed in a hotel, paid the liquor tax, was admitted to high school, needed to pick up their mail at the post office, and more.

There are countless stories of interest about the citizens of Detroit as well, including one about a woman who gave birth to her third set of twins in 1962 and one about two “plucky” Detroit women who stopped a pickpocket in 1911.

Get started searching or browsing the Detroit Free Press here. You just might find your ancestors!