Now that summer’s in full swing, it’s time for vacation! Perhaps you seek out beaches, sunshine and nice ocean views? Look no further than the United States’ very own Key West, Florida. This hot spot for tourists boasts attractions such as gardens, boat excursions, Ernest Hemingway’s former home, and the Conch Republic—a satirical micronation that mock-seceded from the U.S. in 1982. 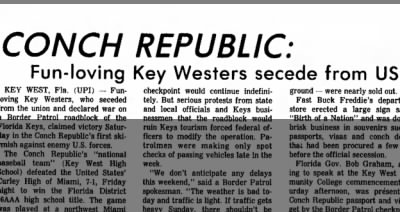 Basically, U.S. Border Patrol officials put an inspection checkpoint on the only roads out of Key West to search for narcotics and illegal immigrants, leading to wait times that would put the DMV to shame. This would be an irritation under any circumstance, but to an island city that runs on tourism the roadblock was an actual detriment to their economy. When the usual avenues of protest against this annoyance got citizens nowhere, the “Conchs”—people of Key West—faux seceded. Mayor Dennis Wardlow was proclaimed Prime Minister of the new republic, which proceeded to declare war on the United States, surrender, and apply for foreign aid all in less time than it took to wait in line at the checkpoint that started it all. 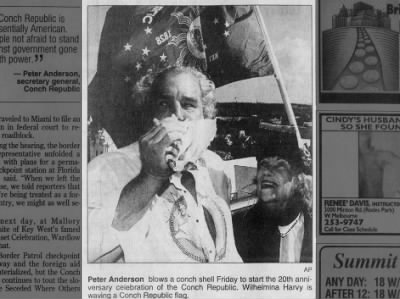 The secession may not have been real, but the publicity it brought did the trick—the checkpoint was removed soon after the Conch Republic declared their independence. Unfortunately you’ll have to wait until next year to join in the still-observed Independence Day celebration—festivities take place the week of April 23rd. It would seem that, in the end, the roadblock didn’t hurt the Key West tourism economy one bit. 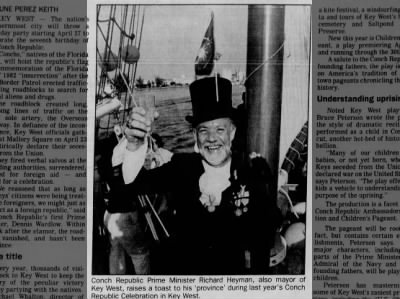 Learn more about the Conch Republic or any other topic of your choice with a search on Newspapers.com.

2 thoughts on “The Conch Republic”