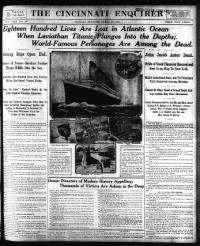 Do you have ancestors or other family from Ohio or northern Kentucky? Come check out the Cincinnati Enquirer, one of the new papers on Newspapers.com. Explore issues of the paper dating back to 1841, when it began publication, up through 1922—or, with a Publisher Extra subscription, access additional issues from 1923 through 2015.

Cincinnati was founded in 1788 and by 1819 had been incorporated as a city. Throughout much of the 19th century, Cincinnati was one of the biggest cities in the nation and the biggest city in the west. Due to its location on the Ohio River, it functioned as a hub for trade and shipping; it also had a huge pork industry and was sometimes referred to as “Porkopolis.”

The Cincinnati Enquirer published its first issue on April 10, 1841, and in 1848 became one of the first papers in the nation to put out a Sunday edition. Starting out at just four pages an issue, the paper steadily grew in length over the decades.

The Cincinnati Enquirer reported on noteworthy local events and issues of the time, covering 175 years of Ohio Valley history, in addition to national and world news. In 1884, it covered the destructive Courthouse Riots, a violent response to a manslaughter conviction that left more than 50 people dead and destroyed the Cincinnati courthouse. In 1914, the paper reported on the death of Martha, the last known passenger pigeon, at the Cincinnati Zoo. The Cincinnati Enquirer also provided in-depth coverage of the Air Canada Flight 797 accident in 1983, when a plane made an emergency landing at the Cincinnati airport and burst into flames, killing 23 passengers. Natural disasters in the area were also documented in the paper, such as the flood of 1937 and the blizzard of 1978.

If sports interest you, the Cincinnati Enquirer has countless articles about the Reds and the Bengals from over the years, including coverage of the famous “Big Red Machine” team of 1970–76, as well as articles from baseball’s early days, when Cincinnati boasted the first all-professional team in 1869.
And, of course, the Cincinnati Enquirer reported on the doings of the area’s residents, from marriages, to deaths, to crimes, and beyond.

Get started searching or browsing the Cincinnati Enquirer here. Or find other Ohio papers on Newspapers.com here.

48 thoughts on “The Cincinnati Enquirer”